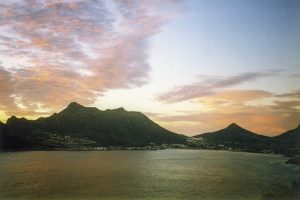 After the meeting we hired a car and, after collecting it, I think we must have had an evening’s drive to the Chapman’s Peak Lookout where one could look back over Hout Bay at the southwest end of Table Mountain and the setting sun.

We would have set off the next morning initially taking route 2. At Gordons Bay this allowed us to look across False Bay to the Cape Peninsula and the Cape of Good Hope. 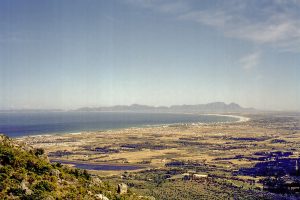 Apparently Cape Hangklip, on the east side of False Bay could be confused with Cape Point on the west side. With southeasterly winds in summer, a sailing ship going into False Bay instead of rounding the Cape would have found themselves on a lee shore. In fact Hangklip was also known as “False Cape” (Wikipedia).

At one of the lookout points we stopped at there were some Baboons. A South Afrikan guy was feeding them which struck me as a bad idea. 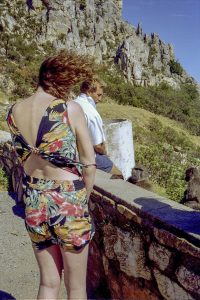 Baboons at a Lookout Point

New Forest ponies can get stroppy if they have learnt to expect food from parked cars and don’t get it. I saw one kick a parked car on one occasion. But I think I’d rather face a stroppy pony than a baboon!

One of the hazards of driving in South Africa was the expectation that you would move onto the “hard shoulder” to allow another car to overtake you.

More scarily, you were also expected to do this if there were two cars coming towards you, and one wished to overtake the other. Given that the hard shoulder was used as a footpath for people and cattle, this could easily lead to dangerous situations. 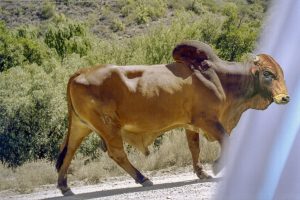 A zebu bull on the hard shoulder (the head was hidden by the car window frame so I’ve superimposed that part of the image from the web!)

Another hazard was the prevalence of dirt or gravel roads. On one occasion we were worried that the road had only just been opened after a rain storm and further rain might make it impassable.

One of the first long stretches of gravel road led us to the shore at De Hoop National Park. Washboard stretches of the road shook us around.

However the huge dunes of white sand were just right for rolling down and the scenery was well worth the gravel road drive. 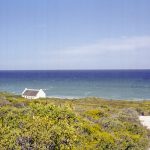 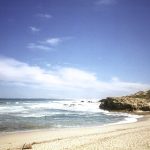 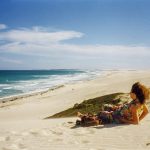 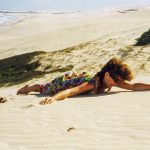