The Solent Breezes caravan park (seen in the photo from the Calshot Tower) is about 1nm away across Calshot Reach. The watch on Sunday 21st August had been very quiet; not many seemed to be out on the water and the wind was decreasing from force 5 to force 4. I was watch leader but both myself and the other watchkeeper spent some of the watch on training a trainee watchkeeper. However there was a warm front approaching from the west and by about 1515 the upper cloud started to produce drizzle and the wind increased to force 6. I joked that we would soon hear a mayday.

In fact the first thing we heard was a radio call to Solent CG from a rescue rib “off Solent Breezes” which was attending a capsized dinghy which had it’s mast stuck in the mud. Someone in the rib had been injured and they reported that they were giving up trying to rescue the dinghy and needed asistance. We scanned the Solent Breezes area and identified a dinghy capsized on its side and also a small rib near the Solent Breezes slipway. The initial thought was that these were the casualties, however the dinghy on its side did not fit with the mast being stuck. Trying to figure this out, I was watching the dinghy through the large binoculars when I thought I saw someone in the water near it’s stern. I called Solent CG on 999. They initially assumed that this was the radio reported incident but I explained that the rib was not attending the dinghy. 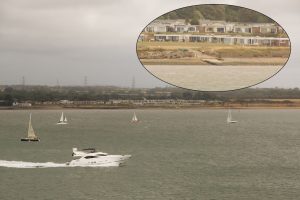 Soon after the other watchkeeper identified a dinghy upside down with a rib and, by this time, Hamble Lifeboat in attendance at a position some distance away from Solent Breezes towards the Hill Head buoy. I again called the CG to tell them that there were definitely two separate incidents. However by now the dinghy on its side was being blown ashore a couple of a hundred metres southeast of the Solent breezes slipway. Once it reached the shore two people, who had presumably been in the water, lowered the sails and started to walk towards Solent Breezes; again I reported this to the CG.

The Hamble lifeboat managed to free the turtled dinghy and tow it back on its side towards Solent Breezes where the rescue rib took over to take it ashore. By now Hill Head Mobile CG unit were in attendence. A day boat was reporting to be having trouble landing at Solent Breezes and the Hamble Lifeboat was tasked to stand by it. In fact it was a drop keel sailing boat which was picking up a mooring to get up its keel before motoring ashore. Meanwhile Calshot LB was tasked to attend the small rib which we had seen near the slipway at Solent Breezes which was apparently from, and seeking to return to, Calshot. In the event, once away from the shore (where there were some largish breakers) the small rib proceeded back under its own power. I stayed on in the Tower for about half an hour after the watch to write up a report.

Lessons learnt: as watch leader I don’t think I handles this as well as I should. When the squall hit and I joked about a mayday, we should have done a very careful sweep of the water. We might then have identified both the turtled dinghy and the dinghy on it’s side and known from the start that they were separate incidents. We would then have reported the dinghy on its side sooner than we did. Fortunately it drifted ashore and the people with it were OK but it could have been otherwise. As it was we were initially delayed in contacting the CG because we thought the dinghy on its side and the small rib were probably the incident reported to the CG by radio.

Seatern Diaries > 2016 > July-Aug: "Stop/start Summer" > 21st August: Incident off Solent Breezes
Because we use Google Maps and other services, using our site may place cookies on your computer. If you continue to use this site we will assume that you are happy with it.Ok