10th February: How to sail a Cadet!

I’m of an age where the first sailing dinghy that most people learnt with was an International Cadet. At 10’6″ long, with a small sail area, and very wide decks designed to keep water out of the cockpit when you capsized, they were the starter dinghy.  We didn’t have Optimist dinghies in those days!

On watch in Calshot Tower on Sunday 10th February the wind at Calshot Light Float was force 5, sometimes force 6. The previous gale had abated but another was forecast for “later”.  When a small dinghy came down the River Hamble estuary flying a spinnaker I classed it as a “vulnerable”.  However seeing it was accompanied by a RIB there was no particular reason to be concerned for it  – but I started watching it anyway because there was hardly anything else on the water. It appeared to have a letter “C” on the sail but I couldn’t believe that an International Cadet dinghy until I could discern the pram bow!

It rapidly became clear that it was being very expertly sailed by the female helm and her crew. They reached across towards the power station, smoothly gybed the spinnaker, and reached back towards Solent Breezes before beating back towards the Hamble and then doing a short run parallel to the far coast.

I’m not sure whether they had it planing (that would need a lot of wind) but they were certainly surfing on the waves at times. Viewed through our high powered binoculars I could see that the interior layout of the cockpit has been modernised since I sailed one back in the 1960’s!

Looking the sail number up on the web I find that helm Katie Yelland and Dom Rowell came 7th in the 2018 Cadet Nationals and 1st in the 2018 Inland Nationals… I assume that they were sailing on this Sunday. They were a bit far away to get good photos but here are some pushed to the limit of my camera’s resolution! 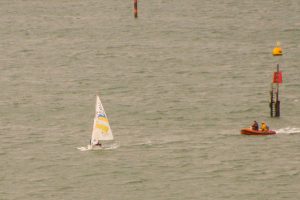 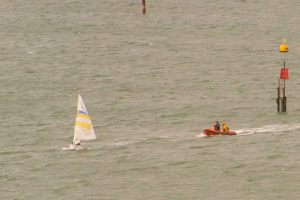 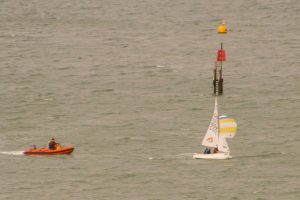 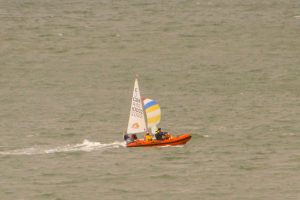 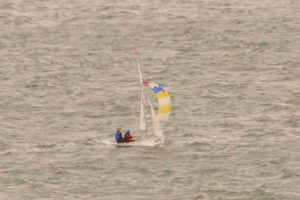 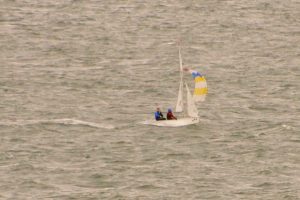 Seatern Diaries > 2019 > Diary Entry > 10th February: How to sail a Cadet!
Because we use Google Maps and other services, using our site may place cookies on your computer. If you continue to use this site we will assume that you are happy with it.Ok