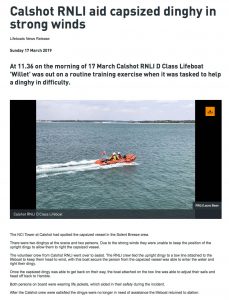 On the morning of Sunday 17th March winds were force 5 to 6 west to west-northwest. During the 11 to 14 hours watch at Calshot Tower there were few boats on the water. However I saw two single-handed dinghies sail out of the Hamble River and head southeast towards the Solent. Through the binoculars I could see that one was a Finn and the other had “FIRE” on the sail, which I later found to indicate a Blaze dinghy with the smaller “fire” rig. Fairly soon after I saw that the Blaze dinghy had capsized roughly on a line between Hook buoy and Solent Breezes. Given the types of dinghies involved I expected that the Blaze would be quickly righted and continue sailing but watching through the binoculars I could see that the helm seemed to be struggling.

I was so convinced that the dinghy would soon be righted that, much against correct protocol, I phoned down to the RNLI Boathouse below the Tower to see if the Calshot Inshore Rescue Boat (IRB) which was nearby on exercise, might go over and take a look. However they wanted me to “do it properly” and contact the Coastguard which I proceeded to do.

As I described the incident to one coastguard by phone, we could hear a different coastguard tasking the IRB for an “incident at Calshot Spit”. Being so close by the IRB was soon heading off to the Spit and radioing that it could see no casualty. I asked permission to call them on ch.0 and, once I called them, they soon had the casualty in view. By now both helms were in the Finn which had dropped sail and had the Blaze, on its side, tied to it. The IRB started towing them and, from what I saw, the Blaze almost pitchpoled into an upright position! The IRB told the CG that the people involved were well equipped and (to our surprise) planned to continue sailing. The IRB called us on ch.65 to ask us to keep an eye on the dinghies, which we did until, a little while later, they returned to the Hamble.

Later in the watch a windsurfer, which I assume to be Erik Twigt, started reaching across Southampton Water from close to the Tower. It’s unusual to see them in that area of water and I took a series of photos which captured a gybe with a resulting short swim and the loss of his hat! 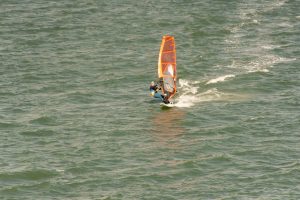 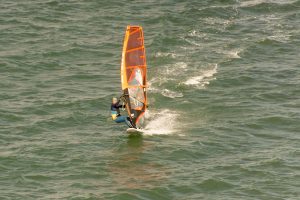 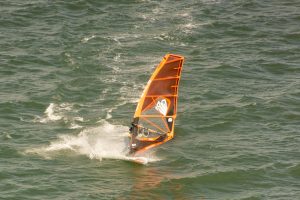 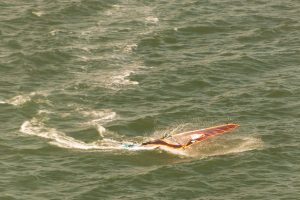 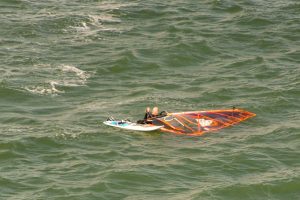 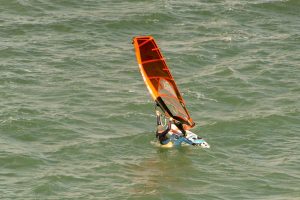 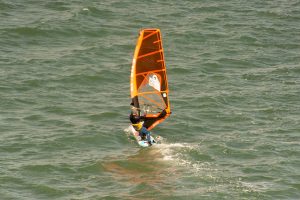 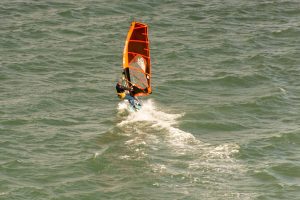 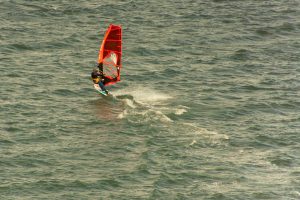 Seatern Diaries > 2019 > March-April: Windy at first > 17th March: Dinghy Incident and a Windsurfer
Because we use Google Maps and other services, using our site may place cookies on your computer. If you continue to use this site we will assume that you are happy with it.Ok