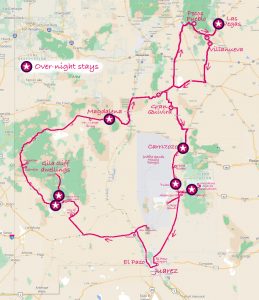 I had agreed to participate in a meeting to edit a scientific planning document which was to take place from Sunday 14th to Wednesday 17th May 2000 at Cloudcroft, a hiking/ski resort in the Sacramento Mountains of New Mexico. I decided to fly out a week earlier and drive around New Mexico, revisiting places I’d previously seen on a trip with Nicky in October 1994.

The weather was hot and very windy, and wildfires were causing conceern, including one in the area of Cloudcroft. In the event, both my road trip and the science meeting were able to go ahead.

Notes: The “guide book” mentioned in some entries is “The New Mexico Handbook” by Stephen Metzger (4th Ed. 1997, Moon Publications Inc.) which I strongly recommend. The photographs are digital “prints” from colour negatives some of which had degraded over time. All the route maps shown are based on screen captures from Google Maps.