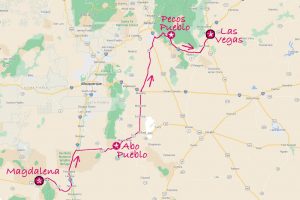 Day 5 (Wednesday):  I left the motel in Magdalena at around 0630am to drive to Socorro. It was still windy, at 7am it was 61 degrees and a hot windy day was forecast. Forest fires were burning in the mountains. In Socorro, having failed to find a local café and thinking that Denny’s would be too much food, I went to McDonald’s for breakfast and to write yesterday’s diary. 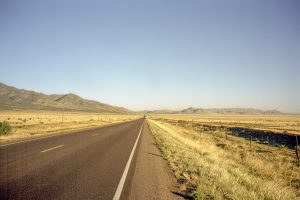 Then I headed up Interstate-25 a little way before heading on US60 across country toward Mountainair and the Abó pueblo remains. The I25 follows the Rio Grande valley north from El Paso to Albuquerque and Santa Fe before diverting to Las Vegas (NM) my destination for the day. 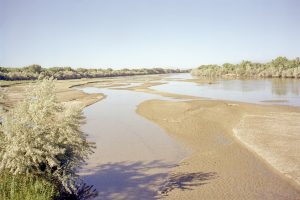 I tend to think of the Rio Grande as the border between Mexico and the USA, something to be swum across by the “wet-backs” – at least if there is any water in it! However in New Mexico it provided the irrigation for the fertile lands farmed by the Pueblo people.

According to the guide book, the Abó pueblo was built around 1150AD and the area continued to be farmed peacefully until the Spanish arrived in the late 16th century. The church of San Gregorio was built by 1620; the Pueblo Revolt took place in August 1680. 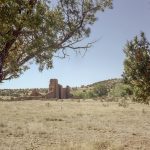 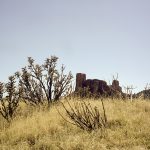 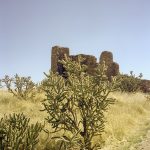 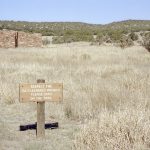 I had decided to head for Las Vegas by going up NM41 which proved to be a pleasant country road across the yellow grass plains. There were road works on the US285 shortly before my routs rejoined the I25. From the Pecos area towards Las Vegas the railroad runs close to the I25 and one of those slow, interminable American freight trains ran along beside me until I turned off on the side road to the Pecos pueblo. The guide book says that by the mid 15th century the pueblo stood five stories high and contained 660 rooms. Now little remains except the ruins of the 17th century mission church, and even those have been reconstructed. A piece of wall demonstrated how pueblo walls are built. I must admit I was mainly looking at the snow on the distant mountains and the great pall of smoke marking the forest fires in the Los Alamos area. 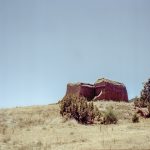 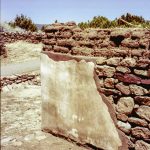 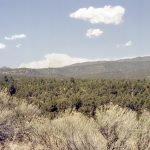 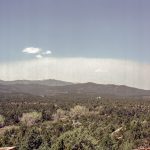 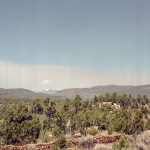 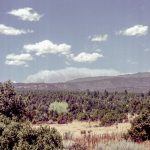 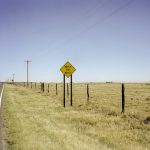 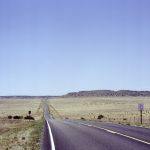 A little coffee shop at Pecos town provided coffee and a muffin before I rejoined the I25 to Las Vegas where I checked into the grand looking Plaza Hotel. Built in 1882, past guests have included Billy the Kid, Doc Holiday, and his prostitute companion Big Nose Kate! In the bar I got into conversation with the German barmaid and a local woman from the unfortunately named ski resort, Angel Fire, which is in the direction of Taos and threatened by one of the many out of control forest fires. 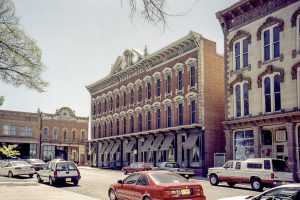 The guide book calls Las Vegas “one of New Mexico’s undiscovered jewels” and so it seemed when I visited with Nicky back in 1994. Now, wandering through the town it was disappointing. The remembered fine bookshop was gone, many places were closed, some boarded up.  Shops that were open were standard book/gift shops of the sort that one might find in Santa Fe. Ah well! 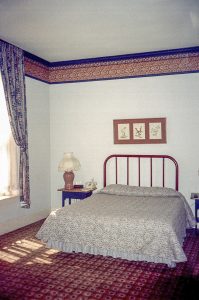 I tried the bar at the El Rialto restaurant but it seemed nothing special so I went back to hotel and watched some of the TV coverage of the fires. In the hotel restaurant I had spinach salad, followed by a sort of Mexican grits meal with tomato, radish, and yogurt as condiments. The food was good but the service was poor, it seemed that new people have taken over. In the bar the nice feel of the afternoon had gone; now noisy locals were drinking Margaritas. So I went back to my room to read before falling asleep. Throughout the night the wind was still blowing strong,  I had to wedge historically authentic the sash windows closed. Stronger wind still was forecast for tomorrow. It sounded like the other major fire down near Ruidiso was staying north of Cloudcroft as far as I could tell.