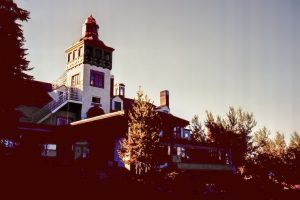 The meeting ran from Sunday, 14th May (day 9 of my trip) to Wednesday, 17th May. It was an editorial meeting for the final touches to the Science plan for SOLAS (Surface Ocean Lower Atmosphere Study), an international initiative within the World Climate Research Programme.

On the Sunday we had an evening party at a local participant’s chalet, on the Monday an (expensive) evening meal in the Lodge Hotel, and on the Tuesday (the last working day) the meal was Nachos in the Lodge bar, before we went down to the Western Bar.

Day 12 (Wednesday): I had breakfast in the Western Cafe, then read the local newspaper before meeting two other participants to drive to El Paso airport via Alamogordo. I took the 33 bus into town and checked in once more at the Gardner Hotel.

I walked into Juárez in the afternoon and wandered around – marvellous sites, various bars, meal was Pollo salad and refried beans in Mexican Cafe. Went into one Mexican bar where I met a guy with toothache who disappeared with two dollars but left his jacket behind! We were drinking “family” size bottles of beer which they called “caguamas” (sea turtles). Then I was talked to by a Mexican girl who seemed drunk and possible trouble,  so I moved on. 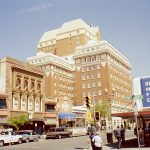 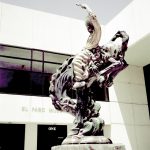 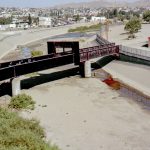 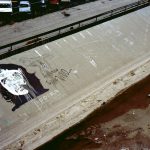 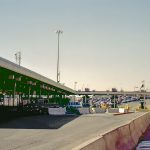 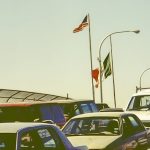 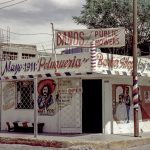 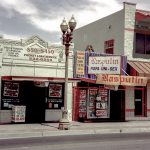 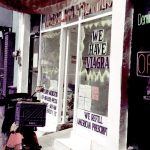 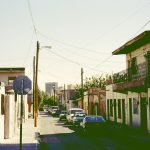 Day 13 (Thursday): I finally got to have breakfast in the diner that had been closed on my first Sunday in El Paso.  Then I went into Mexico, and wandered around. I managed to avoid being attacked by a dog in a poorer area of town, and I seemed to be haunted by a truck that was selling LPG bottled gas and broadcasting its presence like a political rally car would do. Otherwise it was pleasant enough but very quiet at that time in the morning so I went back to El Paso and visited the Art Gallery and Insight Science Museum. Found “The Tap” bar downtown, then went back over the border. 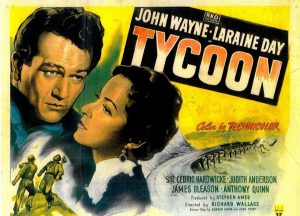 The Mexican girl was in the bar I’d been to yesterday, so I went into the one next door. There I got into conversation with a old guy who said his friend was in movie with John Wayne and…. he then had to go and ask – Anthony Quinn; I shared some beer with him. I’ve since checked and there were two such films: Back to Bataan (1945) and Tycoon (1947) so he has been drinking beer on the strength of that story for quite some time! In the “Kentucky Club” I met an ex-pat Canadian and had three beers with him; then he went off to see a Mexican girl and I made my way back into the USA with Mexican tequila purchased earlier to take back to the UK.

Day 14 (Friday): I was planning to catch the 1010 bus to the airport but was ready for the 0910 so took that.  Despite being nearly 4 hours early, my seat allocation for the trans-Atlantic leg was very poor; it was not to matter!  I spent the morning sitting in the airport courtyard reading Tony Hillerman,  but should have been more persistent in seeing if they would put me on an earlier flight since the 1355 flight was held “due to bad weather at Dallas-Fort Worth” (DFW). 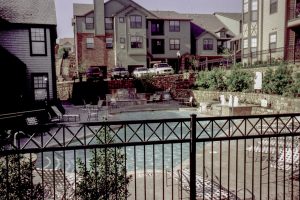 Somewhere in Dallas-Fort Worth!

When we finally took off we got diverted to Oklahoma City because tornados near Dallas had closed DFW airport. Having sat on the runway at Oklahoma my plane only got into DFW at around 2100.  The airport was in chaos and the AA50 flight to the UK had long gone. It took about two hours to get to the ticket counter and get transferred to the Saturday flight by which time there was no chance of getting a hotel. 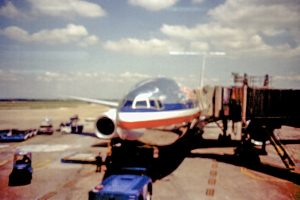 TGIF was still open and fortunately I met a guy, Carlos, who was waiting to meet his housemate Brad’s delayed flight and I got invited back to their place. I finished writing my trip diary on their porch overlooking the apartment block swimming pool and hoping that I would get back to the UK sometime!

Footnote: The travel insurance refused to pay compensation for the 24 hour delay to my flight home because my “first flight had taken off more or less on time”.