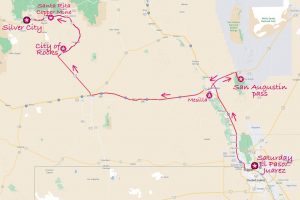 Day 2 (Sunday):  Woke up early (helped by jet lag) and walked out to find that the local diner was closed at that time on a Sunday so had to resort to getting a breakfast burrito at McDonalds (at least they are open!). Checked out early at the Gardner Hotel to drive to Las Cruces where, after a short walk in the old town (Mesilla), I got lost trying to find the road for the San Agustin pass view point. 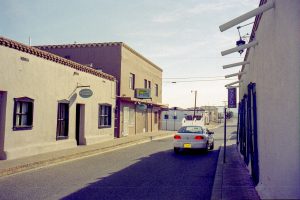 The guide book promised a view to the west of the Rio Grande snaking southwards and, to the east, possibly the glistening White Sands National Monument. In reality, when finally got there (at about 0910), all I saw was the sun reflecting off the low banks of mist. A tramp, with his blankets blowing in the wind, was an unsettling figure in this remote spot, at least until I passed him close to and we said good morning. 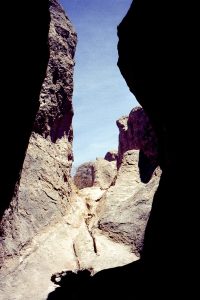 Back to Las Cruces to join the Interstate-10 westward to Deming. It was now hot, with a strong desert wind. Heading northwest for Silver City, US180 was a more typical New Mexico highway with long straights disappearing into a shimmering mirage; those wide vistas but a lack of the spectacular cliffs which often form a backdrop in the north of the State.

I left US180 for the City of Rocks which are really the remains of an ancient lava flow. As one approached the towering rocks, someone had labelled up a small cactus garden.  The State Park has camping sites with fantastic views, but you would need to seek a spot sheltered from the sun and wind. Lunch was some crisps and root beer enjoyed up amongst the rocks. 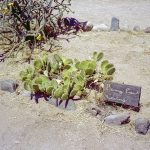 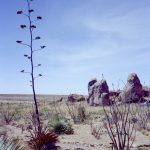 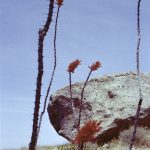 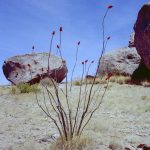 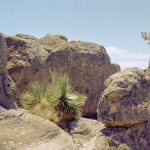 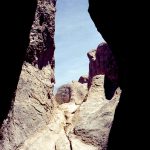 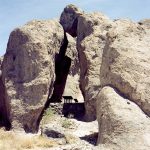 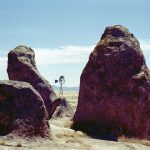 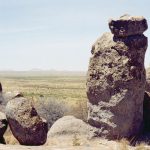 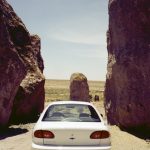 From the City of Rocks I decided to take NM-61 which runs by the side of the River Mimbres.  Possibly continuing on US-180 would have been better scenically,  but my route did take me past the huge Santa Rita/Chico copper mine. 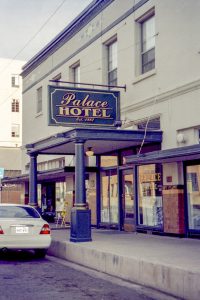 In Silver City I checked into the Palace Hotel, a restored Victorian, downtown hotel; unfortunately, I could only get room over-looking the main drag. Nearby, the Buffalo Bar lived up to its guide book description as being “one of the more, well, colorful watering holes in the area”, a place well frequented by the local miners.

I wandered around downtown in the late afternoon looking for place to eat but everything seemed closed. Finally, on the suggestion of an antique dealer I went to the Grinder Mill, a takeout “mex” place with some diner style tables inside and ordered a Taco salad. 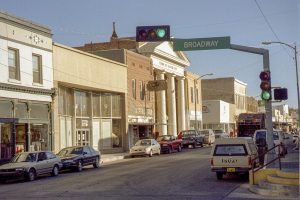 The Buffalo Bar had private party for a “Gila Bike race” in its main room so anticipating a noisy night I got some wine and settled in my room feeling tired still from jet lag. Lots of the local pickups seemed to have their mufflers removed, but the noise outside died down by 11’ish.