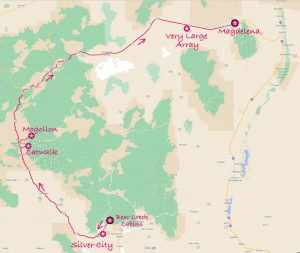 Day 4 (Tuesday): – Leaving my Bear Creek Cabin, I had a proper American style breakfast at the Corner Cafe in Silver City, then drove up US180 to Glenwood for Whitewater Canyon catwalk. Apparently the Apache Chief, Geronimo, used this narrow box canyon as a hideout. The Forestry Service steel catwalk replaced an old water pipe, “The Catwalk”, which was part of the 19th century mining installation. The guide book said it was a 30 minute roundtrip,  but it is at least 30 minutes each way. I’d just got up to end of valley when a school trip arrived. It was hot and I tried “swimming”  in the waterfall pool but it was too shallow. 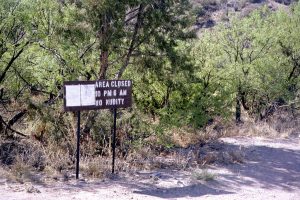 Time seemed to have gone quickly – it was already 12 noon by the time I reached the Mogollon turnoff from US180 but I decided to go up the very winding road (with drop to one side or the other) to visit the ghost town. Mining for gold and silver in the Mogollon area was at its peak in about 1912-15. According to the guide book, Mogollon is now a Lazarus-like settlement being brought back to life by artists merchants and carpenters. However it seemed all closed up with “Private Keep Out” signs everywhere and no sign of life.

I wondered about returning to Glenwood since the New Mexico Handbook showed nowhere to stop overnight before Socorro, however I decided to carry on. 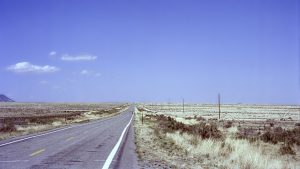 As it was the little town of Reserve looked an OK place to stay, and there were Motels in most of the small towns on route. After Old Horse Springs I was out of the mountains with their “scenic” roads and onto the type of New Mexico road that I love – long straights across the plains often framed by  surrounding hills.

Driving along such a stretch of road, the US60, I started to become aware of the “VLA”  becoming visible across the distant plain. It was an amazing sight. 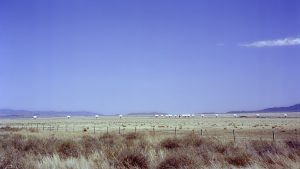 The “Very Large Array” is a giant radio telescope. The larger the size of a radio telescope’s dish, the more signal it can detect and the more accurately it can pin point the source. But there are obvious practical limits on the size of a steerable dish. By having a number of large dishes deployed over an extended area, all acting as a single antenna, it is possible to simulate a much larger dish, at least in angular resolution, and  that’s what the VLA does.

The 28 large dishes are mounted on rail tracks so that the array can be modified, and so that one dish can be maintained whilst the other 27 are operating. 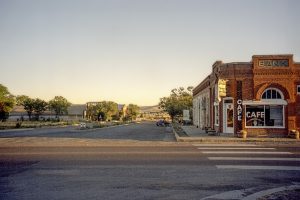 Arriving in Magdelena I decided to stay night at the High Country Lodge Motel. At one time the town marked the end of the railroad and you can imagine those cowboy times with its wide dusty streets. The local meeting place is “Evett’s” a cafe and soda fountain where I ordered an enchilada plate. My notes say that the  “sleazy lounge bar with locals and juvenile sex jokes” drove me back to the Motel wher i sat outside reading one of Hillerman’s detective novels which are all set in the southwest USA. House martins were sheltering under the eaves, and the wind still blowing through the trees.