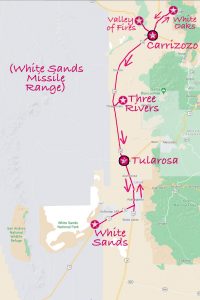 Day 7 (Friday): I’m was due to meet up with other participants in the science meeting tomorrow at El Paso International Airport before we headed up to Cloudcroft together. However the 6am TV news said that schools at Cloudcroft were going to be closed due to fire and smoke. It seems a new fire has started south of Cloudcroft. However the high winds of Thursday and over-night were in the warm sector ahead of a cold front, and the winds were forecast to decrease and veer to the northwest behind the cold front.  I went to the Four Winds Cafe for an American breakfast and then returned to the motel to write my diary notes. I was delaying leaving the motel in order to listen to the TV and see what was happening around Cloudcroft. A report at 0855am said that the Cloudcroft fire now encompassed 20000 acres at that towns were being evacuated.  However they were to the southeast of Cloudcroft which was upwind of the fire.

Ironically my planned first destination was the Valley of Fires. The Carrizozo lava flow is thought to have occurred about 2000 to 5000 years ago and the valley name derives from Indian legends about the event. I’d visited a different area of lava flow Malpais with Nicky in 1994 and we had entered one of the lava tubes; with some trepidation since rattlesnakes like to live in them! Here I could not find the tubes, not realising at the time that I was in a different lava flow.  Before heading south, a short back-track took me to White Oaks, an abandoned town site north of Carrizozo. My main memory is of the graveyard and a touching child’s grave with a teddy bear.

Photo Gallery: the Valley of Fires and some American Trains!… 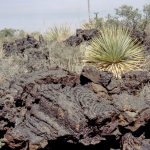 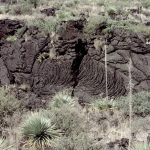 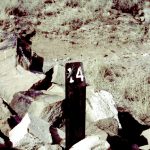 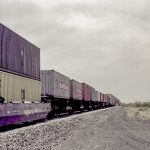 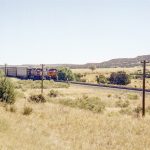 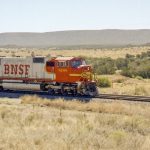 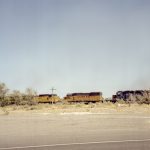 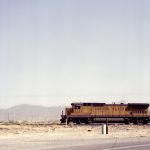 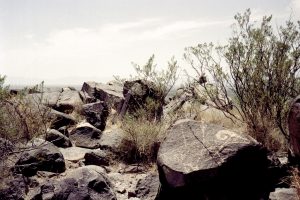 Driving back through Carrizozo and I now headed south to the Three Rivers and the petroglyph site. Turning left off US54 onto Three Rivers Road one has to cross the Union Pacific Railroad. As I did so a train came to a halt over railway crossing, so I left the car and went into the gift shop. Having looked around that the train was still over the crossing, so I got some coffee from the store. American freight trains are very long and always seem to be very slow, despite the multiple traction units up front. 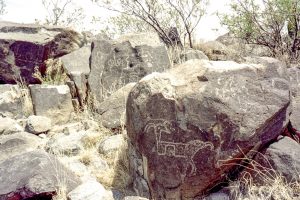 Finally I got to the park. There are supposed to be over 21,000 petroglyphs which are believed to have been made between 1000 and 1400AD (Wikipedia); a lot of old graphiti! Apparently some have been damaged by people shooting at them… only in America.

For me the main attraction is the marvellous view from the ridge. I’d been here before with Nicky and, as before, there were dust devils travelling across the vast Tularosa valley; just too far away to photograph. The whole valley area  is designated as the White Sands Missile Range, so is very empty!

I carried on south through Alamogordo to the White Sands National Park. It is an amazing place, a vast area of white gypsum dunes, and when I was there it was beautifully quiet. I walked the “big dune trail”; just me, lizards, and catapillars. 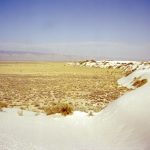 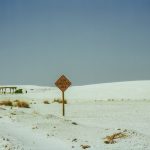 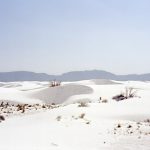 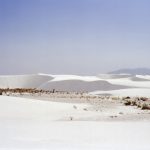 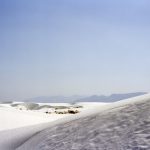 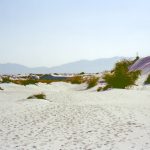 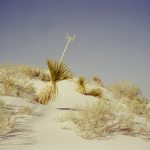 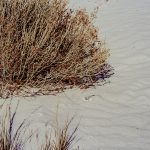 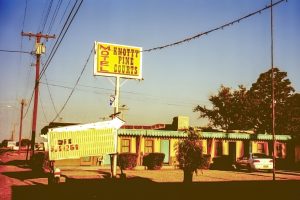 By now it was about 1745 so I headed back to Alamogordo but then really couldn’t stand the idea of staying in the motel strip so continued 13 miles north to Tularosa. The only motel was the Knotty Pine motel and for time I seemed the only guest, but later another car turned up. A burrito at the local filling station diner provided a good evening meal before sitting outside my room and reading.