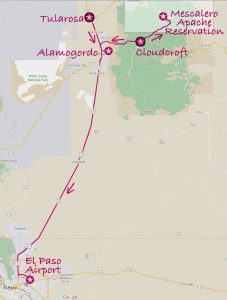 Day 8 (Saturday): I was worried that forecast was for southeasterly winds which might take fires towards Cloudcroft. However the El Paso news read over breakfast in the local diner seemed reassuring. Sorted out all my stuff before leaving the motel and then headed down to Alamogordo and visited the Space Museum before driving up to Cloudcroft. It was too early to check in but I made sure we were meeting there and that there had not been a change of plan due to the fires while I had been travelling. 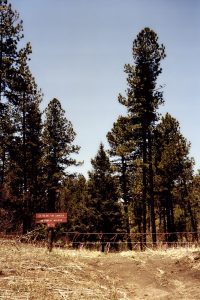 I drove into the Mescalero Apache Tribe reservation a little way; everywhere there were warning signs about the extreme fire danger. Then I had a look around the Cloudcroft shops and the Western Bar. Seemed strange having a western themed bar in New Mexico, but I guess many visitors to the resort come from other parts of the States and only see Cloudcroft and the ski runs. A cycle race had just begun or ended and there were lots of people in town.

A sign on a noticeboard caught my eye. It seems that there is a local bylaw that you can only smoke inside a building or in a vehicle. Makes sense given the fire risk but the opposite of the UK where smoking tends to be outside only! It reminded my of visits to the Harwell Labs where atomic energy research is conducted. Most places in the world an alarm sounding means leave the building. At Harwell if an alarm went off while you were outside you were told to seek shelter inside the nearest building in case there had been an accidental radiation release.

Once it had gone 2pm I checked into the Lodge Hotel. It seemed an odd place which, despite its age, had nowhere near the character of some of the places I’d being staying in, but we shall see. 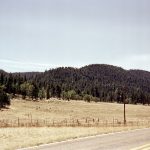 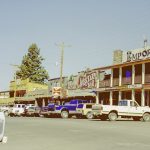 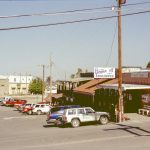 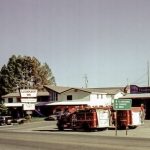 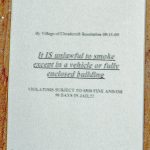 About 1450 I set off for El Paso arriving at about 1710 after a detour to fuel car before dropping it off at the rental agency. Had a meal in the airport while waiting for Bill Jenkins (an American scientist working at Southampton Oceanography Centre at that time) who was due to land around 1830. Then we together with other meeting participants were driven up to Cloudcroft, arriving late evening. Finally, wandered down to the Western Bar for a drink or two.