The only new oceanographic instrumentation tested during the JASIN 1970 field trial was the “Shear Spar” Quoting the description in the Cruise Report (NIO Cruise Report 34, October 1970):

This new instrument was designed to measure shear in the upper 10m of water. It consisted of a vertical spar 10m long, with a doughnut float attached by gimbals at the top, and a weight at the bottom. It carried three 2-oomponent electromagnetic log sensors, at depths of 1m, 4, and 10m. Power was supplied to these, and signals returned, via a multicore cable. It was put out and recovered using the fwd. crane and proved much easier to handle than had been feared, and appeared very stable in the water. Signals were recorded both by data logger on paper tape and directly by computer, at a sampling rate of 2 per sec.

With the length of cable available, it seemed that the spar was too much influenced by the presence of the ship; the shear observed depended strongly on the ship’s manoeuvres. In an attempt to get the spar into undisturbed water, for the final trial it was fitted with a sail (a spare drogue) and the ship was manoeuvred so that the spar was towing the ship downwind. It really needs a longer cable ( 2 or 3 ship-lengths, say) or perhaps radio telemetering.

Later in 1970 I participated on an instrumentation cruise where a new meteorological spar buoy was tested and similar problems encountered. These led to the loss of the buoy. Manoeuvring the ship away from an instrument which was attached to the ship by a cable was very difficult. I experienced similar problems in 1974 when attempting to deploy a pitch and roll buoy from the Canadian ship Quadra during the GATE experiment.

It is hard now to imagine how limited the data recording options were in the 1970’s. Most data was recorded on a chart recorder which then had to be digitised with the resulting numerical data entered into a computer on cards or paper tape. For an instrument to record data internally the only practical option was some form of magnetic tape recorder. Otherwise the instrument had to be tethered to the ship via a multicore cable which carried both power and the data signals.

That the shear spar was directly sampled by computer I find surprising. Personal computers were not available in 1970 (the BBC Model B appeared in 1981/82) so the data must have been logged by the IBM 1800 computer, which had been installed in 1969. As one of the world’s first ship borne computers it had even been featured in IBM advertisements. A possibly unique feature was that the operating system was based on paper tape since it was felt that a deck of computer cards might easily be dropped in rough weather. 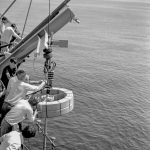 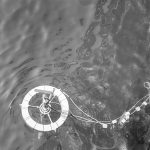 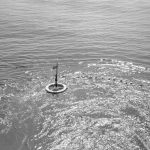 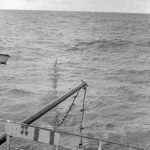 [Previous: On RRS Discovery]   [Next: Introduction to Ballooning]