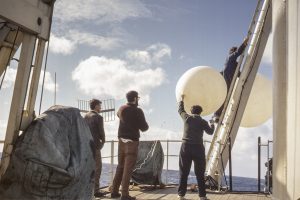 No sooner had I returned from the MEDOC cruise in March, 1970, than Prof. Charnock asked me to accompany him on the next RRS Discovery Cruise (Cruise 32), was short instrumentation trial in the North Atlantic. The aim was to try out a new radiosonde tracking instrument “Lo-Cate” which was based on the Loran-C radio navigation aid.

Radiosondes are instruments which are carried aloft by hydrogen or helium filled balloons in order to measure a profile of the atmospheric temperature and humidity, and determining the height from the air pressure. The horizontal movement of the balloon indicates the wind speed and direction. Traditionally it would be tracked by radar or, in the absence of clouds, using a theodolite. Both methods were difficult to implement on a ship with the installation of a gyro-stabilised radar prohibitively expensive for a science project. 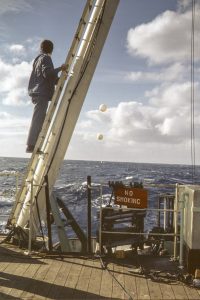 I watch a double ascent hoping it will not get carried into the sea.

Lo-cate was an untried radiosonde tracking system invented by Beukers in the US and for which Plessey Radar were the UK agents. Henry Charnock, who had friends in Plessey management, had purchased a Lo-Cate set for use in the Joint Air-Sea Interaction Experiment, JASIN, which was a UK contribution to the Global Atmospheric Research Programme, GARP, and sponsored by The Royal Society.

The first JASIN trial was planned for June 1970, however the research assistant that Henry had appointed to work on Lo-Cate had handed in his resignation, so the idea was that I should take it on as my Ph.D. project. For me it was a lucky break, and boundary layer research using the Lo-Cate system was to become my career for the next decade.

Following the instrumentation cruise in June, further tests were conducted at the Shanwell, Fife, radiosonde station in May, in collaboration with the Met Office. Testing Lo-cate was a major aim of the JASIN 1970 trial, held at Ocean Weather Station Juliet (52.5°N 20°W), and data from that trial formed the basis of my Ph.D. thesis.

For me JASIN 1970 was an unusual experience in that I left Barry, South Wales, on the 2nd June on RRS Discovery Cruise 34, and returned to Rotterdam, Netherlands, on 9th July aboard OWS Cumulus having transferred ships on the 20th June. This amused the Dutch Customs and Immigration Officers since the complement of Cumulus had altered despite the ship not having visited a port.