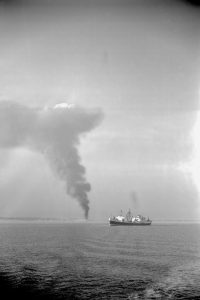 The Banana Sheds on fire as we leave Barry

As RRS Discovery left Barry Docks on the 2nd June 1970 a huge plume of smoke was rising from the Geest banana sheds which were on fire. The cruise plan initially took us to the continental slope and the La Chapelle Bank to look for the tide gauge which had been deployed at the end of the MEDOC Cruise. We didn’t find the tide gauge but the drag brought up what appeared to be a large piece of ship’s plate weighing about 0.5 tons.

Discovery proceeded to Ocean Weather Station Juliet and the Ocean Weather Ship Cumulus arrived there a couple of days later on the 10th June. The scientific work mainly consisted of tests of a “shear spar” and of the Lo-Cate system. Also taking part on the hydrographic survey ship HMS Hecla were teams from the Met Office, flying a tethered balloon, and Reading University, doing radiosonde ascents and firing smoke rockets. 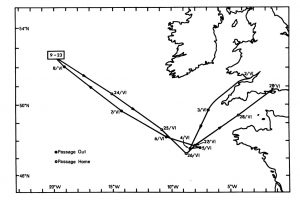 It seemed to be a cruise for recovering items from the ocean. On the 14th June a “burst balloon” spotted in the water turned out to be an over-turned ship’s lifeboat. It had belonged to Ann, a tanker registered in 1951 in Oslo. Fortunately there were no bodies on board but there was a “fine growth” of goose barnacles, some of which were collected and preserved. The lifeboat was returned to the sea.

The next day Discovery spotted and picked up an old yacht mooring which had an even more impressive growth of goose barnacles.

Photo Gallery: Items from the ocean…

On one day at Juliet we were joined by a large group of pilot whales, which the crew call “blackfish”. On that, and later cruises, I have learnt that the blackfish are inquisitive and will swim around the ship even it is not on passage. Sometimes one will put its head out of the water to look at us. Looking at the photos from the JASIN 1070 cruise it looks like the pilot whales had dolphins mixed amongst them, something which is often observed. The pilot whales are themselves really a species of large dolphins.

I transferred to OWS Cumulus on the 20th June with a Dutch scientist taking my place on Discovery. For JASIN, Cumulus had also been equipped with a Lo-Cate system which was on loan from the Berlin Free University so the idea was I could carry on the Lo-Cate trials for longer than had I stayed on Discovery.

The transfer had not been planned before the cruise and, amongst other actions, I sent a telegram back to my dentist in Southampton cancelling my booked dental checkup. When I eventually saw him the telegram was framed on the wall of his surgery – the only time he’d had a ship’s telegram to cancel an appointment!

It’s unusual to be in a small rib in the middle of the North Atlantic (although, for one reason or another, by now I’ve had the experience several times over the years). It provided an opportunity to take some photos of both Discovery and Cumulus from the water.