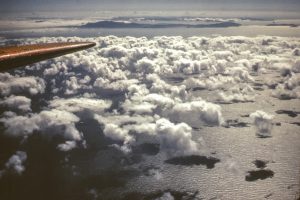 Photo from an aircraft showing boundary layer clouds over the ocean

What we were wanting to do: the study concerned the part of the atmosphere directly influenced by the ocean beneath it, usually the lowest 1 to 3 km of the atmosphere depending on the weather conditions. Known as the “boundary layer” it typically included a turbulently mixed layer which extending to just below the cloud base, and a cloud layer containing cumulus clouds which, over the ocean, often extended up to a capping stratocumulus layer beneath a temperature inversion. 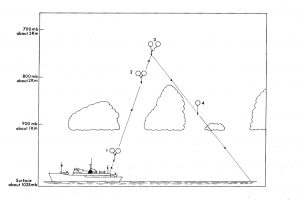 To get detailed measurements of the profiles of temperature, humidity, and wind velocity, we needed the radiosonde balloon to traverse the boundary layer relatively slowly. However unless the balloon had sufficient buoyancy it would get caught in the turbulent wake of the ship and often end up in the sea. The scheme was therefore to use two balloons to take the radiosonde rapidly up through the boundary layer and then use a simple pressure sensitive device to release one balloon and allow the radiosonde to descend more slowly to the sea. 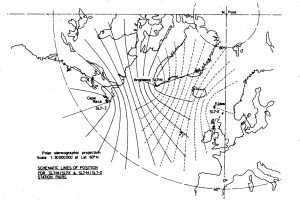 The parabolic Loran-C lines of position.

Tracking the Balloon: Radio navigation aids such as Loran-C compare the time of arrival of signals from two land stations to place the receiver somewhere along a line which defines a parabola on the earths surface. Comparing a second pair of stations defines a different parabola and the position of the receiving station is at the position where the two parabolas cross. One station can be common to both pairs, so only three land stations are needed. 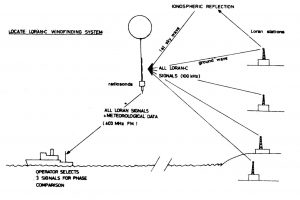 Precise timing is achieved by comparing the phases of the received Loran-C signals. In 1970 this required complicated and expensive electronics. The clever idea behind the Lo-Cate system was for the radiosonde to receive all the Loran-C signals and retransmit them to the ship preserving the phase differences as received at the radiosonde position. Thus the phase comparisons could be performed   by the expensive equipment on the ship, and the electronics in the radiosonde could be kept cheap enough to be disposable. 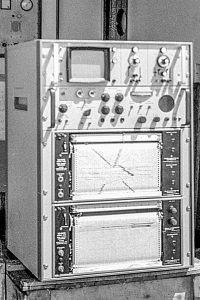 The original Lo-Cate system as built by Beukers in the USA is shown in the photo which was taken in the balloon shelter on Cumulus. The four components were rack mounted in a box which was installed on antivibration mounts for ship-board use. At the top was a standard Hewlett-Packard (HP) oscilloscope, used to display the loran-C pulse shapes. Beneath that was the Lo-Cate unit with switches for selecting the loran-C stations to be compared. Two HP chart recorders were used to record the loran-C phase differences (top) and the temperature, humidity, and pressure data (bottom). For each radiosonde ascent these charts had to be hand digitised to obtain the numerical results.

[Previous: the Shear Spar]      [Next: Ballooning on Discovery and Cumulus]