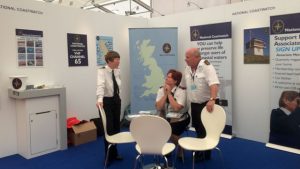 I’d put myself down for helping man the National Coastwatch Institution stand at the Southampton Boat Show because I thought it would be interesting to so what being “on the other side” at the Boat Show would be like. In the event I found it enjoyable and we had quite a few visitors to the stand and many favourable comments about the work of the NCI. It’s a long day though – 0915 to 1830 – and my legs were tired that evening.

The photo shows Lesley Suddes (NCI Chairman and a surprise visitor to the stand) talking to Deirdre Blore and Phil Bridges, both from Calshot. Other Calshot Watchkeepers (apart from me) were Ken Burton and Chris Lloyd-Smith; Caroline Hildrew was from Gosport and Tim Colquhoun and Mike Smith were National NCI representatives. It turns out the Lesley Suddes has an RN/marine meteorological background and has had dealings with the FOAM modelling group at the Met Office.