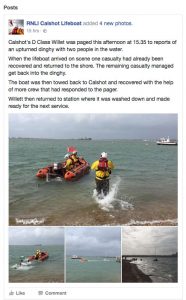 On Sunday 19th March I was, as usual, on the middle watch which in winter is 11am to 2pm. It was windy, force 6 gusting 7, and apart from a couple of radio calls asking for weather information, it was a quiet watch. At the change of watch it transpired that one of the oncoming watchkeepers had cancelled very late, and that the new watch leader was uncomfortable at being left with two trainees. I volunteered to stay on for a time assuming that the quiet times would continue!

Soon I saw a dinghy being rigged outside the Sopwith Hangar. When it launched it looked like the helm was experienced but that the crew was not. I therefore asked one of the trainee Watchkeepers (who is an experienced yachtsman) to keep an eye on it because, given the conditions, I expected it to capsize. What follows is my report of the incident on the Calshot NCI blog (https://calshot.wordpress.com).

When Watchkeepers saw a sailing dinghy launching into force 6 southwesterly winds on Sunday afternoon (19th March 2017) they immediately rated it as very vulnerable and mounted a continuous watch. Within minutes the dinghy capsized a cable or two northwest of the tower. The two people onboard managed to right the dinghy, only for it to capsize again and again. While the helm swam to the boats bow, the crew became separated from the boat which, on its side, was blowing rapidly downwind and away.

This was now a very serious situation and the watchleader immediately phoned HMCG. While the Coast Guard was being informed, a trainee watchkeeper suggested using the megaphone to try to attract the attention of a rib which was some distance away towards Fawley Power Station. Eventually this action was successful and, in heading towards the capsized dinghy, the rib crew spotted and rescued the isolated crew member from the water, who was brought back to shore. 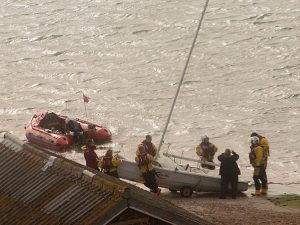 The rib (left in photo) then proceeded to the casualty which was being blown across the shipping lane. It and another rib, which had responded to a CG “all ships” call on channel 16, stood by the capsized dinghy while the dinghy helm managed to lower its sails and bring it upright.

By now the Calshot IRB had been launched and, quickly arrived on scene, took the casualty in tow and brought it back to Calshot. After the incident Solent Coastguard phoned Calshot Tower to say that both members of the dinghy crew were unharmed and to thank NCI for their help. A potentially life-threatening situation had come to a satisfactory conclusion and all had happened in not much more than half an hour.

My guess is that after the crew was separated the helm (who did appear experienced) was trying to get the boat upright and sail it back to pick up the crew. Once the rib told him that the crew was safe he was able to drop the dinghies sails and get it back upright at which point the Calshot IRB arrived and towed him back to the point. As a dinghy sailor myself, it had been scary to see the crew separated from the dinghy with no hope of swimming fast enough to get back to it.