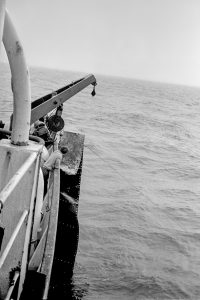 Not the hoped for Tide Gauge!

In June 1970 I was on board RRS Discovery Cruise 34  for the 1970 JASIN Trial. Having left Barry on the 2nd June, on 4th June an acoustic search was made for the tide gauge which had been laid on La Chapelle Bank at the end of the MEDOC 1970 Cruise. The Cruise 34 report describes the tide gauge as “lost”, presumably indicating that a previous cruise had tried to recover it but failed.

Having failed to make acoustic contact, on 5th June the tide gauge was dragged for using a grappling iron on the end of a long wire deployed from the trawl winch.This was unsuccessful but the drag did bring to the surface a piece of ship’s plate weighing about 0.5 ton (according to the Cruise Report).

The tide gauge was similar in construction to the EM Sphere which was twice deployed during the MEDOC Cruise but not recovered the second time and abandoned. Much oceanographic equipment was lost during those years until experience and better materials led to more reliable deployments. Of course it was difficult to make progress because if the equipment was not recovered it was hard to know what had gone wrong!