In February 1986 I attended the fourth session of the Scientific Steering Group for the “Tropical Atmosphere Global Ocean” experiment… “TOGA” which was held at the India Meteorological Department, New Delhi. Nicky came with me and we took the opportunity to visit the usual tourist destinations of Agra and Jaipur and also to fly to Katmandu in Nepal and spend a week there. 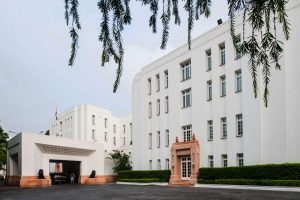 The Imperial Hotel (from their web site)

We were booked into the Imperial Hotel, Janpath, New Delhi, I assume by the meeting organisers although I can’t remember meeting other participants there, so perhaps I chose it.

It was well named, it felt like it was still the days of the Empire. We had a suite with bedroom and a sitting room as well as the bathroom. At the end of the corridor was a small open room where the porter for those rooms was stationed and you had a bell pull in the room to summon him. It seemed odd having, in effect, a servant at your call rather than doing things for oneself, not really my thing! 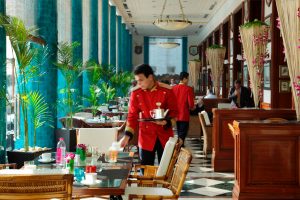 Dining Room at the Imperial Hotel (from their web site)

As well as breakfast we eat most of our evening meals in the Hotel dining room and hence managed to avoid “Delhi Belly”. The only time anyone in the meeting was afflicted was after a evening meal hosted by the IMD on the Wednesday at an Indian Tourist Board hotel. Ironically, the person affected was an Indian scientist living and working in the States. He arrived late at the meeting the next morning looking, for an Indian, very pale and saying “it must be something I ate”, to everyone else’s amusement. 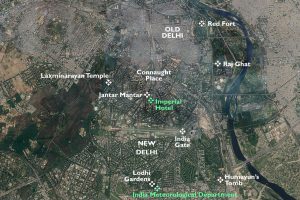 Layout of Delhi and some of the sites.

Tasks in India were designed to employ as many people as possible. Changing a light bulb needed one person to climb the ladder, one to hold it, one to pass up the new bulb, one to take the old bulb, and one person (it seemed usually to be a Sikh ) to supervise! At the India Meteorological Department we had to have a projectionist for the overhead projector. After lunch he turned up late and we had started without him; the next day he took the projector lead away with him at lunch time!

Frustratingly, I can’t find the main set of photos taken during the trip, so those that I have been able to scan are probably seconds and less good; certainly less extensive in scope. However they give a feel for the trip.