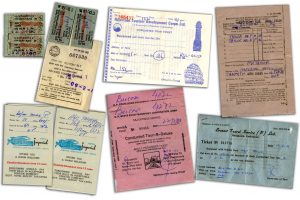 Although by 1986 both Nicky and I had travelled in Europe and North America, India and Nepal was a more exotic destination for us. I now find that we preserved lots of receipts, pamphlets,  and tickets from the trip which, together with notes kept by Nicky, allow our itinerary to be reconstructed.

I had been invited to the meeting in Delhi at quite short notice so it was a scramble to get visas for Nicky and myself from the Indian Embassy in London.  We arranged for tickets to fly to Nepal, but we had no time to make advance arrangements for any travel within India.

We arrived in Delhi on the Thursday and called in at a travel agent that day. Having learnt that we were staying in the Imperial Hotel, he said he would come to the hotel to make our arrangements. Presumably he was making money for himself rather than for the firm, however the costs he quoted seemed reasonable. By the Friday he had arranged rail tickets and an interesting hotel for us to visit Jaipur over the weekend.

I think I must have arranged the rail tickets for Agra.  The passenger names on each train were written into a large journal when you booked the ticket, making for a lengthy business. However I think we paid for a boy to stand in line on the station for us, cutting the need for lengthy queueing!