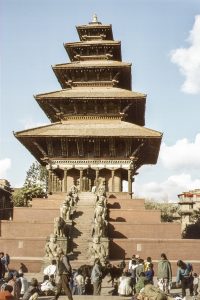 On the Monday (17th February) we took a bus to Bhaktapur. Built in 1707 the pagoda style Nyatapola Temple is the only building in Bhaktapur that I have a photo for.  Being a Hindu Temple Nyatapola was a marked contrast to the Buddhist Stupas which we were later to visit.

Indeed, on the next day we walked to visit the stupa in the temple complex at Swayambhunath. It is sometimes known as the monkey temple since the local monkeys are considered holy and, accordingly, they are even more cheeky and fearless than the monkeys elsewhere! Situated on a hill, you get there via a steep path and we were greeted by monkeys on the way. 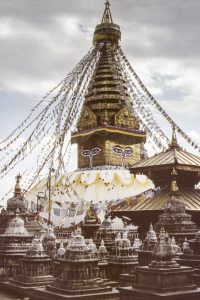 In the temple complex we were met by a young monk who asked us where we were from and, finding we were English, promptly produced a selection of English language leaflets we might like to purchase. We felt duty bound to buy a guide book.

We watched a complicated riual being performed by a man, perhaps a Hindu priest, involving burning incense and scattering of various offerings. Perhaps he was Buddhist, but not a monk.

On the Wednesday we hired bikes and cycled to the Hindu temple complex at  Pashupatinath and then on to the massive stupa at Bodhnath (or “Boudhanath”). 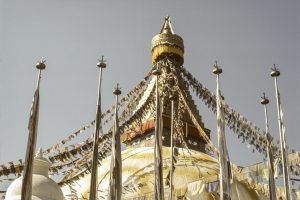 We quickly realised that if we wanted to leave the bikes in order to visit the temples we had to choose one of the kids who would crowd around us and pay them to “look after the bikes”.  The protection money required was not excessive, and the bikes were not harmed, so we didn’t mind.

In 1986 the route between Pashupatinath and Bodhnath was a pleasant cycle ride through the country side. Looking on Google Earth now, it all seems to be built up and part of the Kathmandu suburbs with historical imagery suggesting that the area near Bodhnath was built up at around 2011. 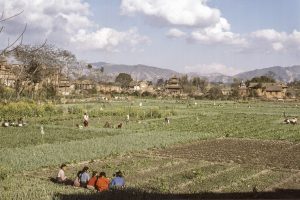 There was countryside between Pashupatinath and Bodhnath in 1986

At one road junction we stopped as a small motorcade approached. As it passed our English Queen who was with the Duke of Edinburgh, waved to us! We knew she was waving to us because we were the only ones there. I’m not a Royalist but we waved back, it was only polite!

Having returned to Kathmandu we were picked up by the Everest travel Service minibus to take us up to Nagarkot Ridge from which we hoped to see Everest and the Himalayas. 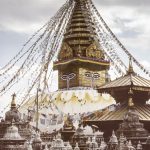 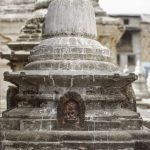 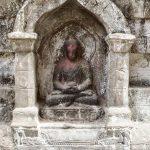 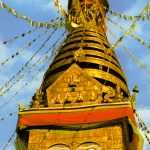 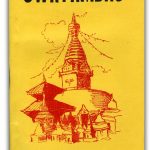 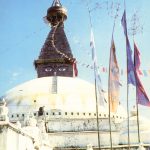 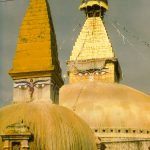