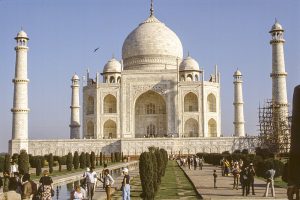 It had been around midnight on Thursday (20th February) when we got back to Delhi from Nepal. We took it eassy on the Friday, visiting bookstores and other shops at Connaught Place in New Delhi since the continuing unrest and threat of rioting kept us away from exploring the old town. In any case we had to be up early on the Friday to catch the Taj Express to Agra.

Delhi, Agra, and Jaipur is known as the “Golden Triangle”, a route followed by countless tourists. In our case we were doing it as two excursions from Delhi, in each case starting with a magical early morning journey past people cooking over small fires in the streets, and the smoke and steam drifting over the station platforms.

On the train you could buy tea which was continually stewing in a large water heater and which was rendered palatable by adding large spoonfuls of sugar – even though neither of us would normally sweeten tea. Carriage doors were kept open with the train in motion and at stations people descended to buy from hawkers before being summoned back on board by the train whistle. 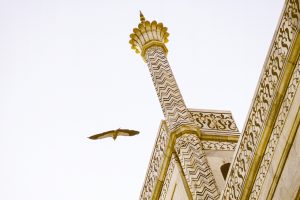 Since we were visiting Agra as a day trip, and despite our experience of the hectic conclusion of the Jaipur tour, we decided to join a city tour which would take us to the Taj Mahal, the Red Fort, and the abandoned Mughal capital of Fatehpur Sikri.

The Taj Mahal was, well, the Taj Mahal. Beautiful in its design and incredible in the intricacy of its inset stonework. The enclosed area, with the iconic water garden leading towards the white marble Mausoleum, is approached through the Great Gate. To one side of the square courtyard is the Taj Mahal Mosque and to the other a guest house, both in similar style to the Great Gate. Beyond the Mausoleum is the Yamuna River river where the agricultural nature of a reed harvest contrasted with the sophistication and craftsmanship of the Taj Mahal (see the Red Fort).. 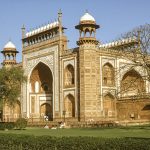 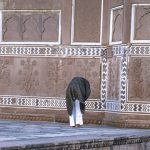 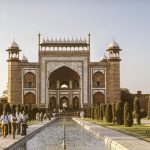 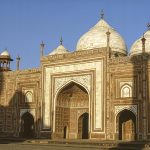 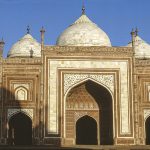 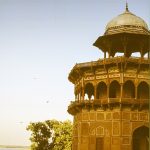 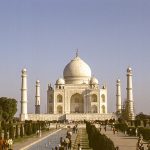 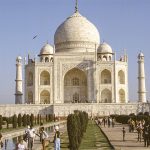 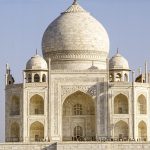 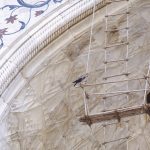 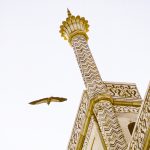 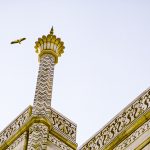 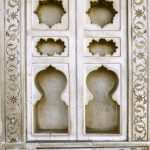 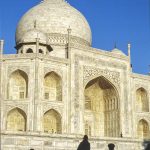 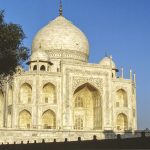