On Wednesday afternoon we were picked up by an Everest Travel Service minibus to be taken up to Nagarkot Ridge from which it is possible to view the Himalayas, given the right weather conditions. Fellow passengers included a loud American couple; fortunately we didn’t see much of them once at Nagarkot. 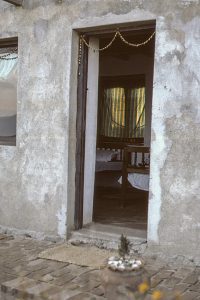 Most of the “hotels” and restaurants on the ridge seemed to be small, plain, single story buildings, including the “Restaurant at the End of the Universe”. Looking on the web now it seems that there has been a lot of modern development, I can’t recognise it at all.

“Hotel Gala”, where we were allocated a simple room, seemed to be run by two teenage boys who cooked us a plain but tasty meal. The water supply was a 40 gallon drum in one corner of the dining room. I think the photo may be the entrance to our room but I’m not sure.

It was cloudy during the evening and again at dawn the next morning. While we stood on the ridge hoping for a view of the mountains a local young villager came and performed his own, private devotion at the simple shrine. Also two women walked past having climbed from the lower slopes carrying large bundles of firewood on their heads. 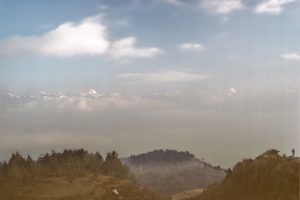 Others members of our party gave up and went for breakfast but we hung on and were finally treated to a glimpse of the Himalayas.  When we did see them, the impressive thing was that we had to look up towards them despite that they are over 100 miles distant from Nagarkot; that, and plumes of snow blowing from the peaks.

They say you can see Everest but I think the peaks we could see were nearer and probably just under 7000m in height. Everest is about 8848m but more distant. What we could see was impressive all the same.

Looking the other way from the ridge there were also impressive views but of human endeavour where the hill sides had been sculpted into terrace upon terrace for growing crops. 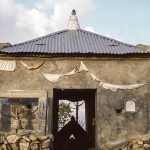 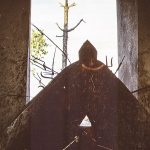 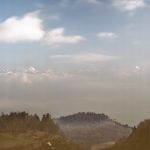 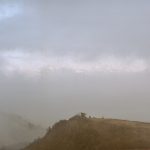 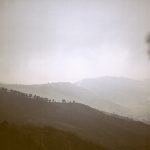 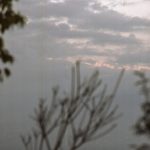 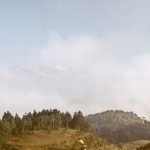 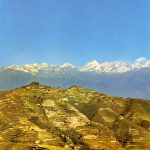 Arriving back in Katmandu we visited the Post Office. The was more involved than one might expect because we had been advised to watch the stamps being franked so that the postcards would stand a chance of reaching England rather than having their stamps removed and recycled! We then walked into Patan for a last time before flying back to Delhi. The Indian immigration officer complained that my passport was bent but it honestly didn’t occur to me until later that he was expecting a small “tip” in order to ignore the problem!