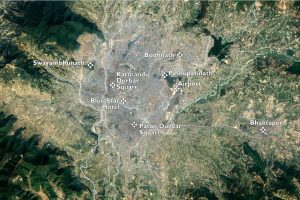 With my meeting in Delhi over, on Saturday 15th February we flew on Royal Nepal Airlines to Katmandu. Formalities at Katmandu airport, and transfer into the city took a frustratingly long time, but eventually we checked into the Blue Star Hotel, a little removed from the central area of Katmandu, but convenient for both Katmandu and Patan.

We spent the afternoon and the following day exploring Katmandu, and Patan just over the river, on foot. The Durbar (“Palace”) Squares in both towns had intricately carved, ancient wooden buildings but Patan seemed less altered by modern influences. 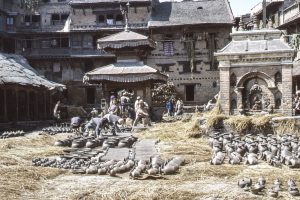 I wish I could find all the photos that we took because I’m sure that much will have changed by now. The photos I do have are rejects or duplicates. However Patan is a major centre for manufacturing pottery, and I do have a couple of photos of that industry..

In 1986 there seemed to be little appreciation of hygiene to prevent disease in Nepal. From the bridge to Patan one could look down on what seemed to be the town rubbish tip by the side of the river. On one occasion we saw the carcass of a cow being butchered on top of it, presumably for human consumption. Meanwhile the bloated body of a dog floated down the river. Having eaten in the Hotel and not fallen ill, we ate most of our meals there simply to minimise the risk and we managed to stay healthy.