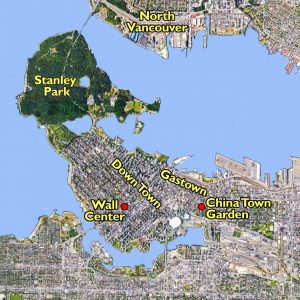 WMO Workshop on Advances in Marine Climatology was held in the Vancouver Wall Centre Conference Facility and Zoe and I found we had been given a room with balcony high up in the Wall Centre Hotel tower with a magnificent view over Vancouver.

Apparently the Wall Centre was a development by Peter Wall, a property developer. In 1999 the Hotel was situated in the south tower, some 335 feet tall. This has since been dwarfed by the “One Wall Centre” Tower completed in 2001 and 518 feet high. Nevertheless, when we stayed there our room seemed spectacularly high! 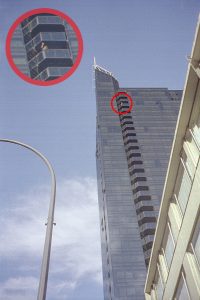 Zoe waving from the balcony of our hotel room

While we were there the glass walls of the building were being cleaned by guys hanging from ropes hanging down from the roof top terrace. It might have looked precarious but, when rigging meteorological instruments on ships, I’ve both hung in a Bosun’s chair and been in a metal cage hung from a crane. I much preferred the simple Bosun’s chair because, with only my own weight to control, it was much easier to avoid injury to myself or damage to the sensors should a gust of wind cause swaying. All the same, these guys were hanging a lot higher up than I’ve ever hung on a rope!

The top photo is the view from our room balcony, here are two panoramas from the roof top terrace.

After the meeting we used trains, boats, and a bus to travel north to Prince George and Prince Rupert, returning via the inner passage and Vancouver Island. We booked back into the Wall Centre Hotel for (I think) a couple of nights. This time we did not have a balcony but we still had a fine view.

On the last night it was very windy with storm damage in Vancouver and we found out just how noisy a high building can be with the glass panels creaking as the building swayed. 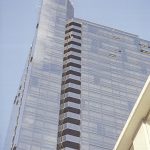 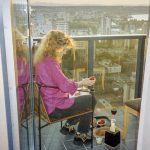 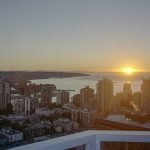 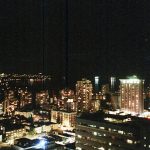 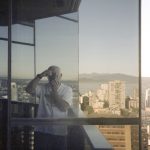 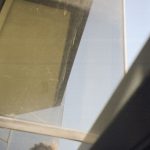 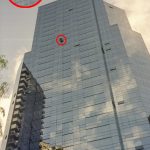 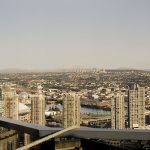 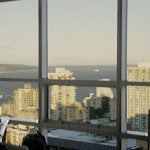 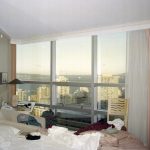