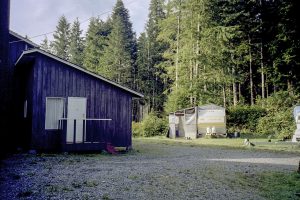 Watch out for bears!

Formally a fishing and cannery village, Telegraph Cove is now a centre for whale watching, which was why we went there. Looking at their web site the resort side of the village seems to have expanded quite a lot since we were there in 1999.

Having arrived at Port Hardy on the BC Ferry from Prince Rupert in the late evening we had hired a car and spent the night at a nearby, small motel. It was a cluster of buildings at the edge of forest, and we were warned that, if going to our car in the dark, we should watch out of bears.  To my relief, and Zoe’s disappointment, we didn’t see any! 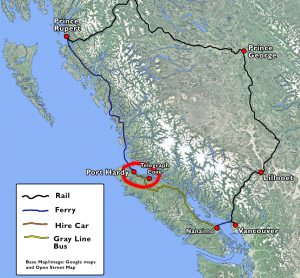 The next day we drove to Telegraph Cove and booked a room for the night before going out on one of the whale watching boats. Along with many of the cove buildings, the accommodation cabins were situated on jetties built out over the water.  We remarked at the pleasant sound of the waves lapping the rocks below.

The whale watching boat took us to within a reasonable distance of a few orcas (“killer whales”). To avoid harassing the whales their policy was to get to a little way off and stop and hope that the whales came nearer. Out at sea on oceanographic cruises I’ve seen large whales blowing in the middle distance, dolphins and porpoises surfing on the ships bow and stern waves, and pilot whales surround the ship and stick their heads out of the water – seemingly curious to find out what we were doing. These orca were more distant, but the scenic backdrop was certainly more impressive!

On the way back to Telegraph Cove some sort of diving sea bird reminded me of the puffins in North Wales which used to try to take off in front of my sailing dinghy but then give up and dive beneath the water instead. We passed kelp beds where there might have been sea otters, and a large bird perched in a pine was said to be a sea eagle.

That evening we settled down in our cabin room to the constant, gentle sound of the waves below us, but in the night a curious thought occurred; the sound of waves was still there even though the tide was out!

[Previous: The Inside Passage]      [Next: Beaver Cove, Port Hardy and to Vancouver]