[1] Dr Carruthers is remembered for scientific devices which were based on simply obtained components. The Abyssal Pisa was designed to sit on the sea bed and tilt in the current. After a time a piston and water-filled cylinder with an adjustable slow leak would clamp a tilt gauge and a disc compass thus preserving a record of current strength and direction.
[2]  this reference is puzzling. The only item I can find on the web was the loss near Toulon of the French Submarine Minerve on 27 January 1968. The search for the wreck continued into 1969 but it was not found until 2019. Possibly I’d misheard a conversation about the loss.
[3] I’d noticed that when searching for a piece of equipment which had come to the surface, everyone tended to be scanning the distance with binoculars. It was worth also looking over the side in case the object was floating close to the ship!
[4] the cable had a grappling hook at its end. I don’t remember ever successfully grappling for lost gear but we did sometimes catch something unexpected (see the “Epilogue”)
[5] more precisely the Dhan buoy which was attached to the current meter mooring and which carried a radar reflector. In this pre-GPS time the Dhan bouy provided a reference point for plotting the search pattern. However the radar reflector was hard to see withing the surrounding sea clutter and you had to keep eyes on it, marking its position on the display with a china-graph pencil.

Measuring the Mediterranean outflow in the Gulf of Cadiz using current meters, a free fall probe, and an em sphere which is reluctant to come to the surface… 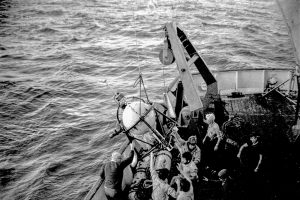 Sunday (1 March): Morning 0500Z launched [EM Flow Meter] sphere and then tripod. Continued with TSD’s, then in afternoon tried to release the sphere acoustically but no sign at the surface. By 1900 decided sphere still at bottom. Continued with TSD’s during night leaving sphere turned off at bottom to be grappled for later. Saw hoopoe and chiffchaff during day and a number of swallows during the night which was exceptionally mild (15.9°C) with some rain. 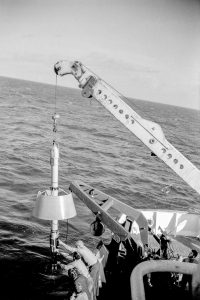 Monday (2 March): Tripod recovered in the morning safely – seems to have worked. John Simpson’s [Free-fall] probe launched midday  but the ship being kept on a TSD station slewed into it, released the weights and left it drifting. On recovery it was found that considerable damage had been done.

The surface pinger on the sphere came on in late morning. This had happened previously and it had been decided that the sphere was still at the bottom held down by the recovery line or by the corrosive bolts which, covered with plastic caps to prevent bubbles getting near the EM head, had not all corroded [by the time that] the explosive bolt fired. The sphere has certainly been through the firing sequence. Any tilt of the sphere would bring on the pinger. 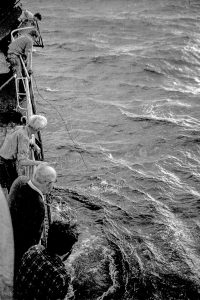 Preparations to grapple were made in the afternoon and the sphere tracked using hydrophones over the stern… when it was sighted at the surface. It was then successfully recovered.

Tuesday (3 March): On watch in morning – TSD’s. Hot sunbathing afternoon with a water battle and launching of the Abyssal Pisa, a Dr Carruthers current device 1 simple sensors, which seemed to work. Sphere film [was] developed and [had] worked. Retired to bar after 6 to 8 pm watch in preparation for 0400Z watch tomorrow.

Wednesday (4 March): Coming off TSD watch at 0800 spent morning dozing in the sun. The Tripod was put down in the morning and the current sphere in the evening. After 1800-2000 watch saw “Guess Who’s Coming to Dinner” and then on watch 00Z to 04Z. 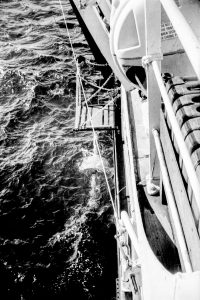 Thursday (5 March): Sunbathed in morning – there’s snow in Britain and a French submarine has been lost in the  MEDOC area 2 old news?. On watch in afternoon, TSD’s and John Simpson’s probe was put down – I saw it [first] at the surface near the port side 3 spotting gear.

On watch 2000 to 2400 streaming hydrophones to look for the sphere – beautiful starry night. Very glad to get to sleep for whole 7 hours.

Started dragging for sphere in afternoon and throughout the night – method being to circle the sphere position at about 1 knot and then steam off hopefully dragging the cable over the sphere 4 grappling. I was put on radar measuring range and bearing of the current meter data buoy 5 radar watches at 10 minute intervals.

[Previous: Gibraltar & the Atlantic]   [Next: Time to go Home]