[1] this sounds like they were confused. A Head of State gets 21 guns but a Head Of Government only gets 19. Possibly they fired 19 guns to honour the Governor of Gibraltar and then realised that, as the representative of the Queen, he should get 21 guns. However Gibraltar does have a Chief Minister who would qualify for 19 guns. Possibly they fired 19 guns and then added a couple more so as not to offend anyone!  The last two discharges were so close to Discovery that the ship shook to the extent that we were concerned that some of the accommodation windows might have cracked!
[2] craning off a large American limousine for use on the few and narrow roads of Gibraltar seemed both unnecessary and impractical! While we were anchored in Gibraltar an important task was to exchange the collection of movie films with a new set provided by the Mission to Seamen.

We head for Gibraltar; while anchored in the harbour an American warship arrives; we see Atlantic and Mediterranean waters meet; then set a mooring in the Gulf of Cadiz… 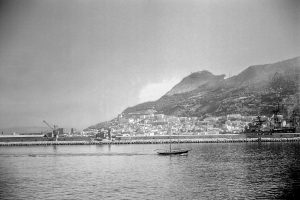 Friday (27 Feb): By 0800Z – Gibraltar harbour and at anchor. Soon after an American warship steamed in and fired a gun salute (19 or 21?) from about threequarters mile astern, then came up and fired two further guns abeam of us 1 19 guns?. Masses of men on board, guided missiles, helicopter, VW minibuses and a saloon car 2 new films!  Gibraltar not too impressive but weather glorious. 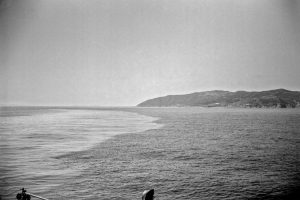 Mediterranean water meets Atlantic water in the Strait of Gibraltar

Sailed 1130 and [had] views of Algeciras and also the African coast – lopsided mountains and sandy beaches, Africa looks inviting. On echo sounder watch through the Straits and [we had the] volume turned right up to look at sea return – probably the Atlantic/Mediterranean interface visible as well as many fish.

The Atlantic water looked green compared to the Mediterranean, more seagulls too. 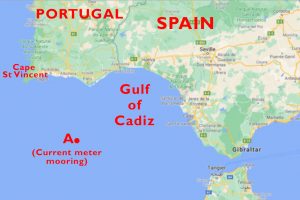 Then TSD’s at position “B”, 4 miles east of “A”. In afternoon the freefall probe was sent down to 200m and successfully recovered.  Sunny day but some cloud, little wind.

Photo Gallery: Gibraltar and the Strait… 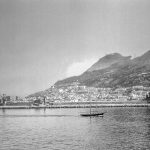 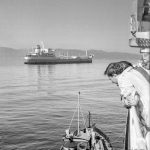 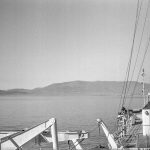 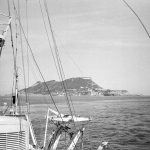 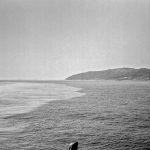 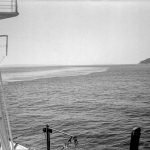