[1] Students traditionally had to share the S9 cabin which was forward and almost next to the bow thruster. Consisting of a propeller in a thwartships tunnel near the bow, the bow thruster struggled to hold the ship on station in a strong wind with the result that it produced a great deal of thumping and banging noises. Had the cabin not been inherently noisy due to the Formica wall lining of the cabin creaking, and the noise from the ventilation system, it would probably have been impossible to sleep.
[2] John Swallow had brought along a 16mm film camera (Bolex or Bell & Howell, I can’t remember which)  from the National Institute of Oceanography photographic group.
[3] probably bits of the trailing tentacles of jellyfish and similar creatures; they looked magical at night.
[4] by this I meant the inverted U shape that the echoes from an underwater object make on the echo sounder as they approach and then recede from the direct beam.
[5] this was a two watch system so you got a decent night’s sleep every second day. I hated it and much preferred three four hour watches as worked by the ship’s officers, especially if I could do the 4 to 8 ( and 16 to 20) watches.
[6] there are many references to sunbathing in my diary. A favourite location amongst scientists and crew was the “Monkey Island” (wheelhouse top) where we worried more about the potential irradiation from the ship’s radar than the effect of the sun. However “Health and Safety” had much less prominence in those days as the lack of hard hats and lifejackets in the photos of gear being deployed amply testifies.

We commence TSD Stations in the Gulf of Lion; interrupted by strong winds; a large whale is sighted… 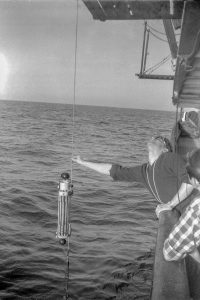 A cocked water bottle about to be lowered. The messenger to trigger the bottle below can be seen at the bottom right of the bottle.

Thursday (29 Jan): Commenced watches at 0800Z. On echo sounder until about 1300 when we came onto the first station, then did bottle sampling.

1630Z: finished watch; 1730: tea; 1800: relieved other watch for tea; 1830: went to bed. Slept fitfully. Bow thruster makes a lot of noise 1:our cabin. In the dark squids could be seen under the winch floodlights, they dart at food and light up now and again.

Friday (30 Jan): On watch 2400 to 0800, two stations; then to bed. 1600 back on watch but after completing the station the weather worsened and further dips were impossible. Spent night hove to and the other watch was not called. 50 to 60 knot winds but a fetch limited sea.

Saturday (31 Jan): Sunny day but with gusty 50 knot north wind blowing spindrift and spray everywhere. Took lots of still photos and NIO cine film 2:cine film in morning – very spectacular sea. Ship steams into it at 2 knots and then turns and runs at 9 to 10 knots back.

Saw 1630 showing of the film “Rotten to the Core” which was surprisingly funny, then early to bed. 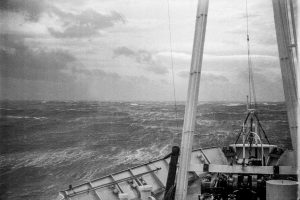 Sunday (1 Feb): Not called until 0400Z when the wind had dropped enough to make a station; shallow, 9 bottles on 800m cast. Ship then took three hours to reach the next station and find 500 fathoms of water by which time we were off watch.

A large number of casts were completed during the day and evening.  In the evening the wire brought up parts of sea creatures 3:jelly fish? glowing in the floodlights. We sample O2, 2 x salinity, and sometimes phosphates and silicates.

Monday (2 Feb): On watch all day. Saw a whale – the ocean appeared to be smoking over a shallow spot with breaking waves and seagulls above. Then it was a bit further aft and then, about 50 yards from the stern and coming towards us the whole back and fin; looked huge, dived and not seen again. Six “plume traces 4:echo shape” were recorded on the echo sounder soon after leaving the station. 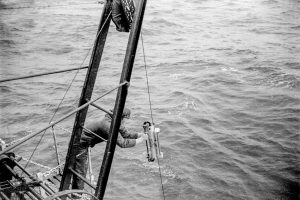 A triggered water bottle being removed from the wire.

Tuesday (3 Feb): Called at around 0700Z, on station but after lowering the TSD and about 7 bottles the wind was again gusting 50 kts and the wire was almost horizontal. Abandoned the cast bringing the bottles in from the aft hydrographic platform. Off watch at 0800(!) and not on again until 1800. Spent most of day sunbathing on deck and got quite red 6:monkey island. Evening was spent working up results. Still too rough to work.

Wednesday (4 Feb): Other watch called at 0630, weather much calmer and we were doing TSD and bottle casts all day. felt grotty in morning with a bug that seems to be going round a different person each day.

Beautiful sunny day but the winch is always on the shady side of the ship. French Coast Guard aircraft buzzed us in the afternoon.

Saw first part of the film but skipped the after tea part spending till 2000Z talking in the bar. Slept till 2345 then up and on watch.