[1] which seems very cheap compared to most modern oceanographic equipment! In my later research we used ultra-sonic anemometers costing £14,000 each!
[2] I guess it was in the late 1980’s or 1990’s that the idea of sending people on “staff bonding days” was suggested in NERC. But one of the perks of working in an oceanography group was that most of us had been to sea together. We had lived together on a ship and endured bad weather, enjoyed successful deployments, and suffered from sea sickness and hangovers together!
[3] Decca Navigator was a radio navigation aid available in coastal regions. It worked on the principle of ranging to shore transmitting stations by measuring the timing of the received signals. The difference in timing placed your receiving station somewhere on an hyperbola and by using at least three stations, the intersection of the hyperbola gave you your position. Loran-C which I later was to use to track radiosondes worked on the same principle but with lower frequency, longer range, signals.
[4] this last, shown here in italics, was added in pencil in my Cruise diary sometime later. Plessey Radar were the UK representatives for the Loran-C based Lo-cate radiosonde tracking system which was to be a central part of my research work over at least the next decade. While I was at sea on the MEDOC cruise the research assistant that Prof. Henry Charnock had recruited to work on Lo-cate had handed in his resignation. Charnock had realised that, instead, this could be my Ph.D. subject. Straight after returning from Cruise 31 I was out on Cruise 32, an instrumentation test cruise during which we did the first radiosonde balloon tracking trials. By June I was again to be on Discovery for Cruise 34, the JASIN 1970 Trial. However I did not know that as the MEDOC cruise ended.

We are forced to abandon the EM log sphere; the current meters are lost; but we have a party; the tide gauge is laid on the way home…

Saturday (7 March): Having had no success with dragging for the sphere the pinger was turned off and the sphere abandoned at 0800 hours and we steamed over to the current meter mooring. 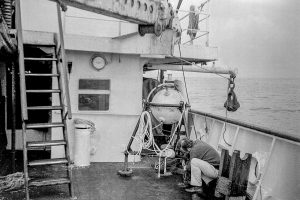 Bob Spencer prepares the Tide Gauge for deployment on the way home.

The Dhan buoy was recovered and the surface buoyancy brought aboard but it was found that the trawl floats had not had enough buoyancy to prevent the cable snagging around the subsurface buoyancy. In trying to lift this, too much strain was put on the cable which parted and the current meters sank to the bottom ~£7000 worth 1 only?. Since there was no time to drag the mooring had to be abandoned and we set off for home.

Party in the bar that night was a great success so…

Monday (9 March): Off Finisterre in morning – many ships, misty valleys, rain squalls and sunlight. Sea is fairly calm, weather a lot colder. Spent morning washing the water bottles and thermometer tubes and emptying oxygen bottles. Afternoon was just about warm enough to sunbathe. On watch in evening looking after the [sea] temperature recorder and TS profiler, little to do.

A day of ships and dramatic Blake-like lighting. A great skua accompanying the ship. 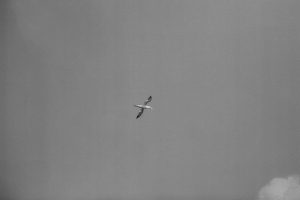 My best photo of a gannet!

Tuesday (10 March): A calm night in which we made good time put us on station off La Chappelle bank by 0800 hours. Free fall probe was launched and successfully recovered but the main object of interest was the large numbers of gannets – 40 or so at least which would take to the air in a given period and plunge into the water, wheeling, dropping and folding their wings just before impact – a fantastic sight. Also fulmars and a petrel. 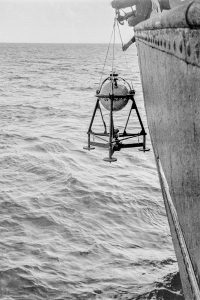 The asdic plate was lifted and the blank without a pitot replaced, the TS profiler brought in and the echo sounder and Decca 3 nav aid used to find a suitable place for the tide gauge [which was] laid without incident in the afternoon.

By 1600Z heading for home – no echo sounders, thermometers or profilers, in short no watches; films tonight.

Wednesday (11 March) Spent day crossing the Channel slowly – ahead of time due to the good weather and by evening of Portland Bill – can see the loom of the lighthouse and the glow of Bournemouth (?). A day spent packing [(i.e. all the scientific gear)] and the evening in the bar.

Thursday (12 March): Woke up at approaches to the west Solent, picked up a Pilot and docked by 0930. Not off ship until 1400 however when signed off and given a lift to the University traffic lights – by Plessy car! 4 Plessey Radar 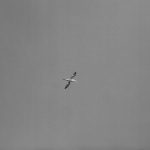 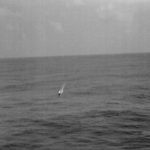 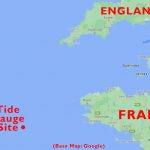 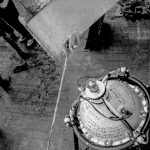 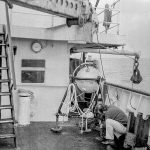 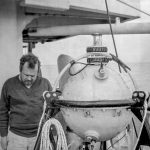 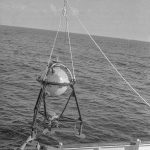 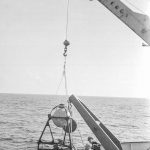 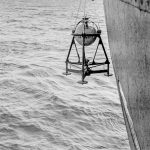 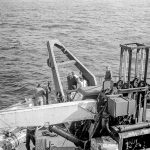