[1] First established in 1964 the Bouée Laboratoire was a large manned floating buoy moored by a single 3650m long cable in a depth of more than 2000m in the Gulf of Lions. I’d rather be on a ship!
[2] John Swallow was notoriously bad at keeping everyone informed of his forward plans for the work on the ship. This gave him freedom to change his plans if need be, but was frustrating for the rest of us. While the meeting went on scientists from Discovery were hovering within earshot to find out what he was telling the French scientists! Times have changed and nowadays both scientists and crew are kept informed by regular meetings.
[3] A halo around the moon or sun is caused by high level cirrostratus cloud and often is the first sign of an approaching warm front and hence of an approaching low pressure area.

A rendezvous with Jean Charcot; TSD stations continue when the wind allows; I arrange to stay on the cruise; we head for Toulon…

Thursday (5 Feb): Long night (2400 – 0800) but it went reasonably well and we did two stations. Passed the Bouée Laboratoire 1:manned buoy in the afternoon but a good way off, looks impressive though. 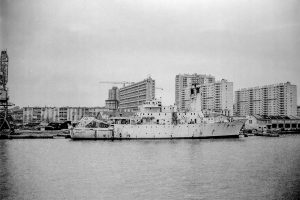 The Jean Charcot in Toulon.

The Jean Charcot is in pursuit from Toulon. Catching us up at about 1700 they asked for a conference and Big John reluctantly agreed. Four of them came over by dinghy for 1.5 hours 2:secrecy . The Charcot has twin parallel funnels and a large “A” frame forward. Steel decks but fine state rooms we are told.

Friday (6 Feb): A sunny calm day.  The 9040 TSD depth unit isn’t working and an older unit had to be used. In the evening the other watch stayed on till 0100 [the next morning] and completed the grid.

Saturday (7 Feb): I being fool enough to get up, stayed up all night and called the others at 0500 for a repeat of one of the stations that had been messed up. So far, despite the lack of Mistral there has been at least one station per line that has been pretty well mixed, otherwise stratification. 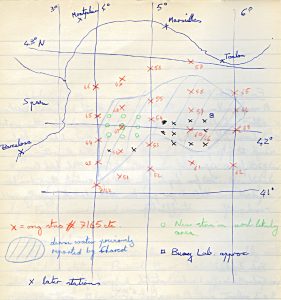 Sketch chart from my diary showing the new station grid in green.

Very calm. We have started a grid of nine stations in a 3 x 3 square centred on about 42°00’N 4°30’E – the most promising area [for deep water formation by convective mixing]. One shallow cast per station, 10 miles between stations.

Told Henry [Charnock] I should like to stay on for entire cruise; he says they will pay me my messing plus 5 shillings per day so things should not be too expensive.

Sunday (8 Feb): On watch all day, [the weather] still fairly calm. Large number of single cast stations. Early to bed in evening but not called till 0330 due to a long steaming time. Arranged for £10 in Francs; Henry Charnock says it’s OK for me to stay on, [he] will pay money into bank. Hot and sunny afternoon.

Monday (9 Feb): Stayed up all day, saw “special performance” of “Two for the Road” at 0900Z – early lunch – letter writing in afternoon – on watch during evening in fairly calm conditions but a halo on moon and cloudier sky – weather looks like worsening 3:weather signs. 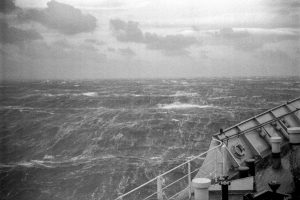 Hove to waiting for a chance to work.

Tuesday (10 Feb): Force 8 [winds], pitching into swell, day spent working on data and we are reasonably up to date – but calmer by 1600Z and we were able to start stations again in the evening.

Wednesday (11 Feb): Stations with TSD and 1 bottle today with 5 mile [separation]. Much work to get data up to date before Toulon.  Off watch during day and wrote letters and slept. Party in bar that night.