Day 1: To Amarillo and Canyon 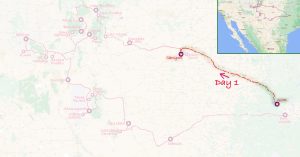 Saturday October 8th: We left Garrett Creek Ranch to drive to canyon via Amarillo. We were driving through Texas past many oil wells. Lunch was in a Texan roadside cafe where one patron was so enormous, we couldn’t believe that he could get through the door. Later we stopped at the “Sonic Drive-in” where we sat ignored at the only table outside. Amarillo seemed a large town and we continued straight on to Canyon, less than 10 miles to the south. 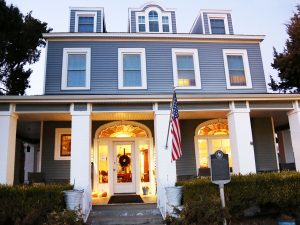 Hudspeth House from the web site

Nicky admired the artist Georgia O’Keefe who had been head of the art department at the West Texas State Normal College (now West Texas A&M University) in Canyon. We therefore booked bed and breakfast in at the Hudspeth House, where O’Keefe had normally dined.

Having had our evening meal at the “Cowboy Cafe” near the railroad, back at the  Hudspeth House we were invited to use the Japanese style Jacuzzi before turning in for the night. 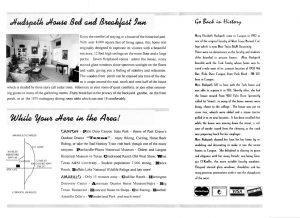 To get to the jacuzzi we had to go through a living room where our hosts were watching TV sitting in high chairs, like those used by dentists, and couldn’t help wondering (no doubt wrongly) whether the TV picture switched to a view of the Jacuzzi once we had entered it!

Through the night we could hear the lonesome wailing of the trains on the nearby railroad tracks, so evocative of the US plains.