Day 9: In Santa Fe then Gallup via Pecos 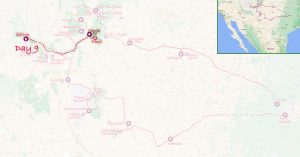 Sunday October 16th: Back to Denny’s for breakfast – our notes say “very full” which I assume means the cafe, although knowing what Denny’s breakfasts are like it could mean our stomachs! We spent the morning and early afternoon in Santa Fe. Nicky looked around the down town area and found a good music shop. I walked down Canyon Road which the New Mexico Handbook described as “originally a footpath used by 13th century Indians travelling between the valley and Pecos pueblo, and later by the Spanish conquistadors, the route follows the Sante Fe river through the gorgeous mountain pines of the Sangre de Christos”. 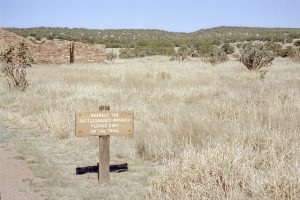 I have to admit I was not impressed by Santa Fe, finding it touristic and crowded; however it was probably bad planning to have visited on a Sunday. We met up again at Woolworth’s coffee bar and after a further wander round shops, left Santa Fe to drive to Pecos.

Our notes say Pecos was disappointing… “mainly just the church ruins, and a reconstructed kiva” . However the setting was beautiful and we noted the sign saying “respect the rattlesnakes privacy”. I went back to Pecos during my “Road Trip” in 2000 and took a photo of the sign. 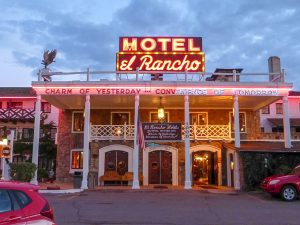 We now headed west on the I40 aiming for Grants but then, probably influenced by the Route 66 song, decided to go on to “Gallup, New Mexico”! There we found (you could not miss) the El Ranco Hotel… a blaze of pink neon and flashing lights! Nicky managed to negotiate a reduction on the room price from about $50 to $35, probably because it was getting into the evening.

We ate in the Hotel which offered good, reasonably priced food but there was no wine or beer served because it was Sunday.

When filming Westerns in nearby Monument Valley, Hollywood film stars stayed at El Rancho. Rooms and menu items are named after some of them. On the restaurant walls were signed pictures of Film Stars standing alongside young waitresses. We were touched to see that a couple of those waitresses were still worked at El Rancho despite the intervening years! 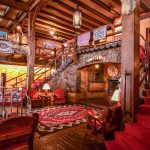 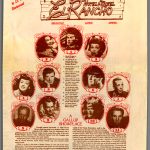 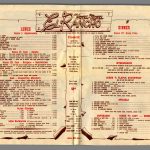 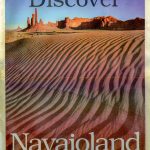