Day 7: Bandelier in the Rain! 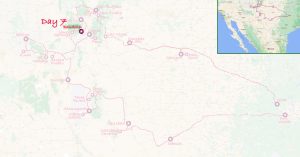 Friday October 14th: It was dry at 6am when I woke up but by 7am it was raining and it felt like there was a storm approaching. Breakfast was fruit and biscuits in the tent before we walked the 2 miles or so from the Juniper camp ground to the ruins.

It was a beautiful walk down the side of the canyon with mist rising up through the trees. The ruins consisted of pock marked cliffs, the foundations of talus buildings, cave houses, with ladders between levels. Given the rain, we didn’t take photos but I’ve scanned the (dried out!) pamphlet from the park Visitor Center. 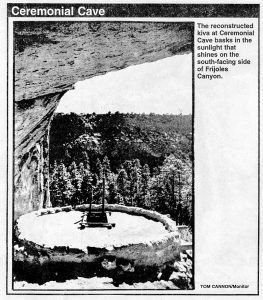 Lunch consisted of some good, but expensive, rolls bought from the Visitor Center snack bar. It was now raining hard so I walked back up the Frey trail to get the car while Nicky looked at the various books for sale. By the time I drove back the rain had eased, so we walked to the “Ceremonial Cave” which was actually a large over-hang reached by a series of four ladders. There was also a reconstructed kiva – a covered sunken room used for ceremonies.

With the rain continuing we drove to White Rock to get some dinner. The only cafe open was the Pizza Hut, the other(s) it seemed had gone bankrupt.

It was not a good experience! We ordered garlic bread and three out of the advertised four slices arrived. We ordered a “Road Runner Pizza with added tomato” and a cheese and tomato pizza arrived. We complained to the manageress who said we would not be charged for the pizza. Then some 15 minutes later, a Road Runner pizza arrived! Now over-whelmed with pizza we asked for a “doggy bag” and returned to the camp site with a box full of pizza slices. 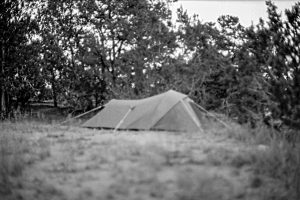 It was still raining and the rain set in harder overnight with water running along the side of the tent from the slope above. Inside we were generally dry apart from the velcro attachment  points on the fly sheet and the effects of condensation. The weather had been wet but it could have easily been worse, as we were to realise the next day! 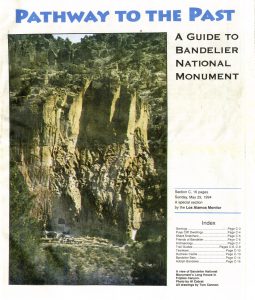 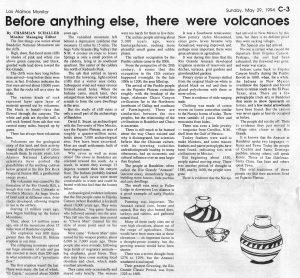 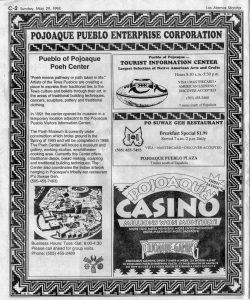 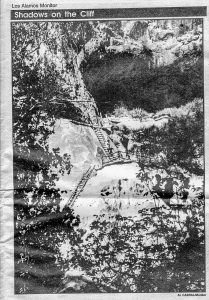 1 “Pathway to the Past, a guide to the Bandelier National Monument”, a 16 page supplement to the Los Alamos Monitor on Sunday May 29th 1994 was given out at the Visitor Center. The Los Alamos Monitor ceased publication on 30th August 2020, a victim of the covid-19 crisis.

[Previous: Abiquiú to Bandelier]       [Next: Bandelier to Santa Fe]