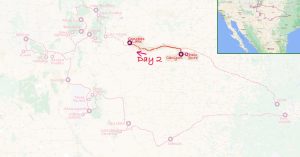 Sunday October 9th: Over breakfast we talked with the Hudspeth House inn keeper who had lived in Cheltenham. He pointed out the location of the O’Keefe house in Canyon. We then drove to the Palo Duro Canyon and, after a visit to the Park Visitor Centre, ended up at the horse rinding Center. 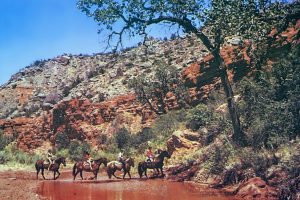 The One hour Horses: Mounted up we rode down to the canyon river accompanied by a young guy whose proper job was Rodeo Bull Riding! We were then left by ourselves to ride along beside the river with instructions to only cross the river at points where we could see horse tracks emerging on the other bank. This we did and rode along happily until we got to a point where the horses would go no further.

It was about time to turn back anyway and we got back to the coral just as our one hour period was finishing. We told them about the horses refusing to go on, and they said that was because we had only hired them for one hour. Puzzled, we asked what would have happened if we had paid for two hours… the answer was that they would have given us different horses! 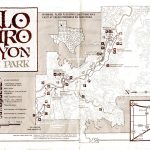 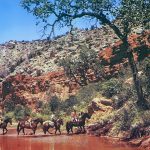 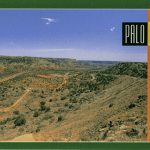 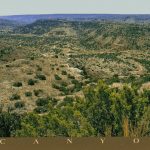 Having eaten in the park shop we walked a little in the canyon before leaving to drive on to New Mexico. Our route was back to Amarillo where we joined Interstate 40 west which follows the line of the historic US Route 66. “…You’ll see Amarillo, Gallup, New Mexico…” well that was to come later! At one point a ridge provided a view over the plains stretching away for ever. 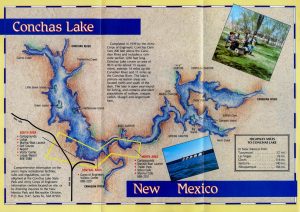 At Tucumcari we turned northwards onto the NM104 to Conchas Lake where a damn has created a large reservoir and an inland resort where we planned to stay the night.

There was definitely the feel of an out of season holiday resort with most places closed up. Fortunately the motel was still open for the last week of the season. In the cafe there was a choice of lasagne or lasagne. We ordered wine to celebrate my Birthday and there was a search for a bottle opener. However we dined by a window with a beautiful view over the lake. 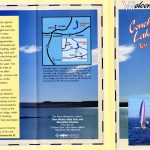 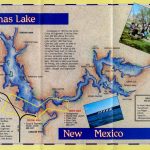 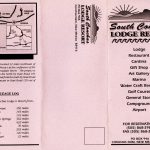 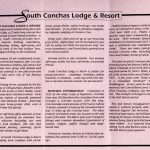