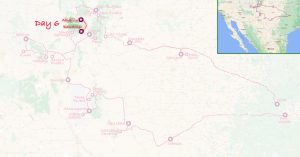 Thursday October 13th: After breakfast at the Abiquiú Inn, Nicky finally managed to contact the O’Keefe House by phone and arrange a visit at 12 noon. Having bought an O’Keefe book and postcards at the motel gift shop we drove back to the Ghost Ranch but couldn’t find O’Keefe’s summer residence which was somewhere off down a trail. Returning to Abiquiú we had coffee in the Mexican Store. 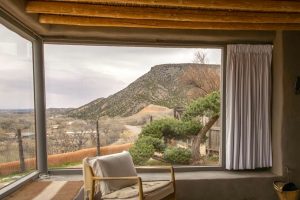 View from O’Keefe’s bedroom in Abiquiú (from the web)

While Nicky toured the O’Keefe House I climbed the nearby mesa. Meeting back at the House at 1330, we got stamps from the Post Office (buying stamps always seems a challenge in the USA!) and burritos and coffee from the General Goods store opposite. The burritos had been unevenly warmed in a ancient looking microwave. 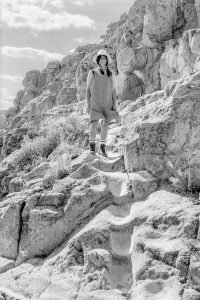 Nicky on the climb to the dwellings

We now headed south towards the Bandelier National Monument, famous for its cliff dwellings. However on route we stopped at a site of the similar Puye Cliff Dwellings on the Santa Clara Indian Reservation. The Walking Tour Brochure says that Puye translates as “pueblo ruin where the rabbits assemble or meet” (a rather nice name, but also a very economical use of syllables!).

With a very strong wind blowing over the cliff side we climbed the rock cut steps, well worn over the centuries. The “cavate” (cave like) rooms appear to have been back rooms with the main rooms, now largely missing,  built on the tallus slope. 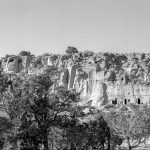 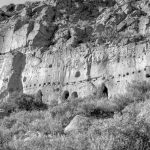 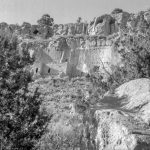 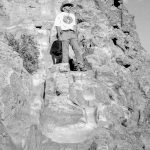 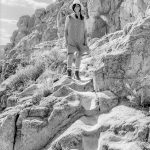 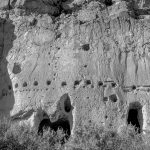 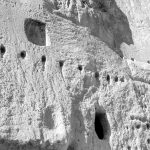 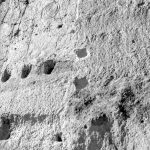 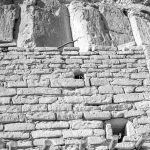 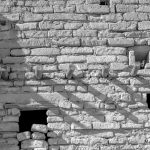 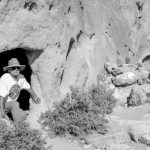 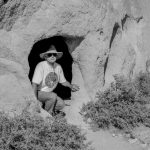 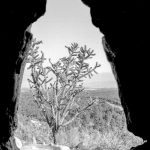 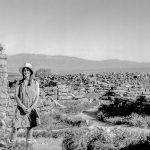 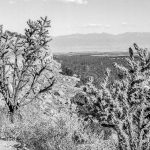 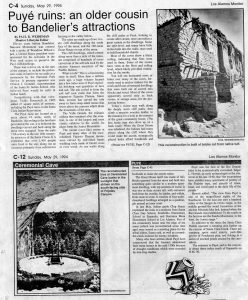 A supplement from the Los Alamos Monitor which we were to be given at Bandelier had an interesting article about the Puye remains. When we finally we drove on to Bandelier, after visiting the Visitor Centre, we were pitching our tent in the last light of day2. In the twilight I saw a roadrunner and a jack rabbit on the mesa.

It had been a sunny day but with increasing wind and clouds and middle level convection (indicating atmospheric instability) had built up during the afternoon.

1 From the weather and the way we are dressed I think these are all Puye rather Bandelier since it was raining much of the time at the latter. Also the cliff face is much higher at Bandelier.
2 the area is around 36° north and in early October it was light from about 7am to 7pm.

[Previous: New Buffalo to Abiquiú]       [Next: Bandelier in the Rain]