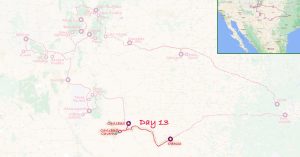 Thursday October 20th: We were up early and had breakfast at “Jerry’s” which turned out to be not as good as Denny’s normally are, however Motel 6 had given us discount tokens which tempted us there. Given that I was actively caving back in the UK I was keen to see the caverns although the most spectacular, Lechuguilla Cave, is a caving expedition rather than a show cave. 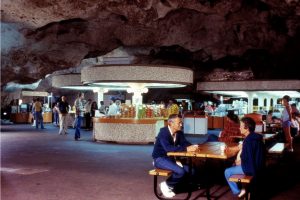 The lunch room (unattributed – from the web)

We were at the Caverns National Park, some 18 miles south of Carlsbad, by about 0900 and entered at 0930, walking down to the Lunchroom (there are elevators down too!).  I couldn’t quite get my head around the idea of there being a food hall, information desk,  and gift shop all inside the cave!

We joined the 11am guided tour of the Queens and Kings Palace and Papoose rooms. The Ranger talked a lot and the tour took about 2 hours. 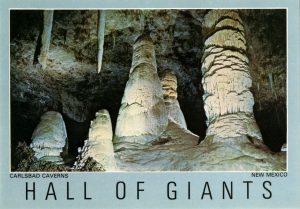 But otherwise the lighting in the cave was good, quite subtle and without the coloured lights often used in show caves. Old stalactites had “popcorn” decorations, and there was flowstone with rimstone floors. Many helictites and “bent” stalactites attested to the strong drafts that apparently exist in winter, nevertheless there were some straws. The stalagmites were as thick as in the Hall of 30 in Otter Hole, the most spectacular cave I’ve been in back in the UK.

We had lunch in the Lunchroom (!) and then toured the Big Room before leaving the cave at 1515, quite a time underground. We visited the nearby White City gift shops before heading east for Odessa.

We were now on the journey back. Cutting down to the I20 via back roads we went past a large salt lake. At twilight we entered Texas with a thunderstorm flickering in the distance and Indian music playing on the CD player. By the time we checked into Motel 6 in Odessa it was evening.

[Previous: Cloudcroft and White Mountain]       [Next: Odessa to Fort Worth]