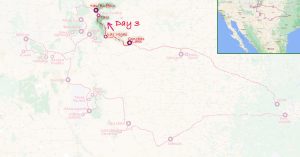 Monday October 10th: We had an early morning, peaceful walk along by the lake. A man  fishing told us that here in New Mexico we were an hour later than Texas time. Following breakfast at the hotel we headed west on NM104, a beautiful drive through escarpments and brush land plains. 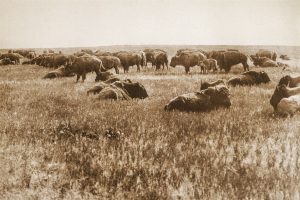 Buffalo on the Great Plains -photo: Edward S. Curtis 1927 (from a postcard)

We stopped for a drink at the “Canadian Escarpment Historical Marker”. Apparently the escarpment landform runs northeast from the vicinity of Las Vegas, New Mexico, almost 100 miles to Clayton, New Mexico. To the northwest of the escarpment the High Plains grasslands reach to the edge of the southern Rocky Mountains.

Having driven to the escarpment top we were now in the High Plains.  Las Vegas could hardly be more different to its more famous namesake. It had the feel of a university style town with nice old shops1. We had lunch in a Mexican cafe before driving on northwards through the mountains to Taos. 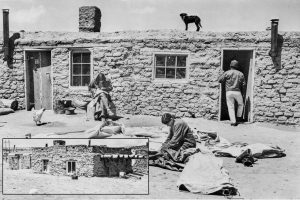 New Buffalo: A visit to Visitor Information in Taos resulted in us ending up at New Buffalo, once a hippy commune and now a Bed and Breakfast establishment. We chose the Garden Room which I think may be the round, higher part of the building with a round window at the left in the drawing above. The window looked out over fields. The only other people staying at New Buffalo were also an English couple.

It wasn’t until the Wednesday that we met Rick Klein, the owner, and an instigator of the original 1960’s commune. The building is adobe built and Rick said when they asked the Taos Indians how they built the pueblo, all they would say was they used “magic mud”! 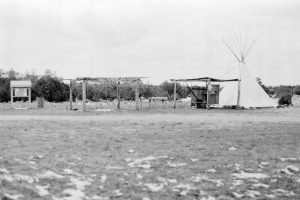 A teepee similar to those at New Buffalo, seen at a camp site

In the film “Easy Rider” they ride past Taos Pueblo before arriving at a commune. The building is probably a film set but this “hippy” section of the film was supposedly inspired by New Buffalo. I have a book “The Alternative – Communal Life in New America2” by William Hedgepath and Dennis Stock which features photos taken at New Buffalo in the 1960’s. I’ve created the illustration of what it was like then from two of their photos (hope they don’t mind!). 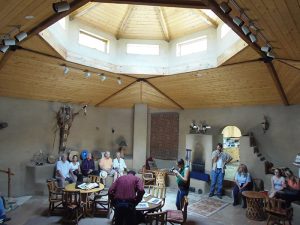 Nowadays there is a web site for the New Buffalo Center but it is not complete and the Center is said to be for sale, so a new episode awaits it. A photo from their web site shows the central communal room as it is now, updated from when we visited but the same sort of shape and size that I remember.

In 1990 you could cook and eat your food in the communal room but on the first day we didn’t have food with us so we eat at the “Chilli Connection in Arroyo Hondo (instructions: “left at the blinking light”!). 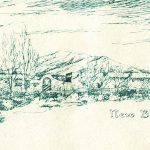 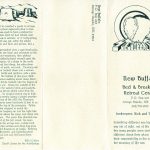 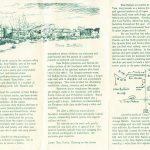 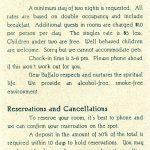 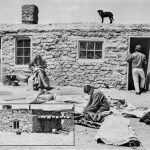 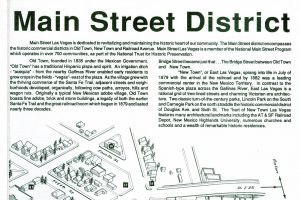 1 I visited, and actually stayed in, Las Vegas during my Road Trip in 2000. Sadly by then it had a run down feel with many shops closed down. The Las Vegas street map from 1994 (printed on expensive “cloth” type paper) has a section on the “regeneration of Main Street” so perhaps we saw it at a good time and the project did not last.
2 published by First Collier Books, 1970 (out of print)