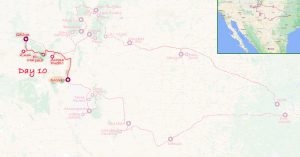 Monday October 17th: We woke up to find snow on the ground and had to scrape it off the car with the spatula from our camping gear; however the roads looked clear. Breakfast at El Rancho consisted of very large hot cakes and fried potatoes. 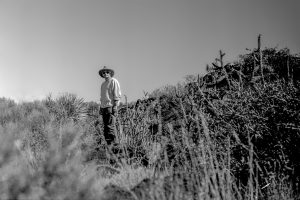 We drove out to the Zuni Pueblo where Nicky bought a Mole Fetish ( Wikipedia )and also some Fetish Beads. We then used the back road, Highway 53, past El Morro, and stopping at the Malpais (“bad land”) lava field.

We found a lava tube junction cave where I looked in one long tunnel and we both walked through a short tunnel. However there were lots of loose and sharp lava blocks and it felt like the sort of place where you might accidentally disturb a rattlesnake. 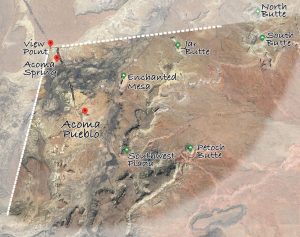 Acoma Pueblo is the “Sky City” situated on top of an extensive mesa, some 360 feet above the plain below.

We approached along Indian Service Route 38 and just before you descend to the plain there is a view point from which we took the photographs of the panorama which includes the Enchanted Mesa and the view looking towards the Acoma mesa. 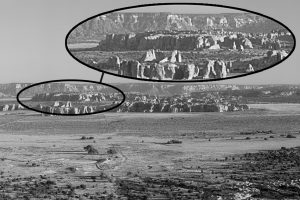 The Acoma mesa from the view point

We had lunch at the Visitor Center before joining the 3-40pm tour of the Mesa top. This was led by a human tape-recorder guide who reminded me of the Naval cadets who used to do tours of HMS Victory, perhaps they still do. We were tending to lag behind the party and, as a result, Nicky got charged $2 for some $1 fry bread by a 97 years old Indian woman!

The San Estevan del Rey Mission Church was tremendous with roof timbers brought to the mesa top on foot from Mount Taylor, some 30 miles to the north (and snow capped during the time of our trip). The tour party had been driven to the mesa top but we were allowed to walk back down the path to the Visitor Center.

We now drove back to to the I40 and then cut across to the I25 at Socorro where we rented a room in the San Miguel motel. For onvce we failed to get a good price reduction! It had been rather a rushed day due to trying to see both the Zuni and Acoma Pueblos and the evening meal ended up being a take-away from the nearby Taco Bell! 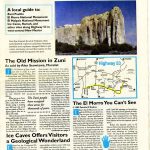 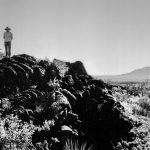 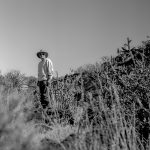 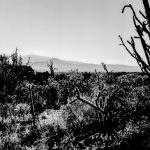 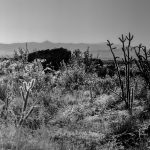 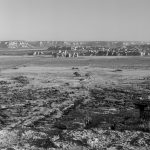 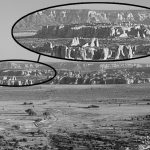 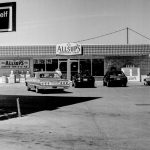 [Previous: Santa Fe and then to Gallup]       [Next: Socorro to Alamogordo]