Panorama on the road to the Ghost Ranch 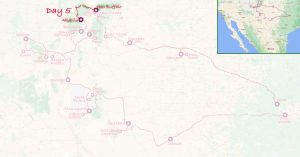 Wednesday October 12th: We woke at New Buffalo to another frosty morning. There had been many more people at New Buffalo last night and we had met the founder/owner Rick Klein who told us about the “magic mud”. Our departure from New Buffalo was delayed by losing and having to search for the car key! Finally we set off for Abiquiú1, taking the “north loop” which commenced by taking the I64 over the spectacular Rio Grande bridge.

In the San Juan mountains there was a beautiful mix of bright yellow Aspens, the dark greens of the pines and the grey, bare boughs. Far views opened to the north.For lunch we had biscuits and coffee by the roadside and we took some photos which, after the trip, Nicky stuck together to form a framed panorama of the two of us and the distant view. I have it on my bedroom wall. Nowadays I can recreate the panorama digitally! 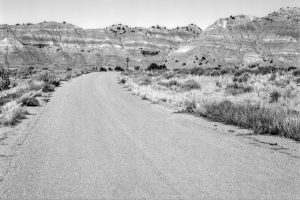 Nearing Abiquiú the cliffs were a fantasy of colours being striped white, red and pale yellow, with a forground of red soil and scattered dark green bushes. We visited the large and small echo amphitheatre; natural rock formations with grim human connections and then Ghost Ranch where Georgia O’Keefe had her summer home. Unfortunately the “Living Museum” at Ghost Ranch was a something of a miniature zoo and it made us feel sad for the imprisoned raccoon and beaver. Nowadays Ghost Ranch is listed as a retreat centre and hopefully no longer has caged animals. 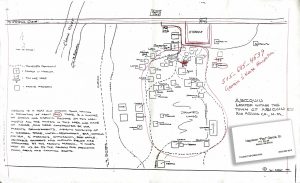 A local called “Nap” seemed to be the “Tourist Info” for Abiquiú. He sold us his $1 map of the town and gave us the phone number of the Georgia O’Keefe Foundation. It’s hard to remember that in 1994, unlike today, one could not just “go on the web” and get the information needed; the web did exist, but it was in its infancy. Nickt tried phoning the Foundation but kept getting their ansaphone. 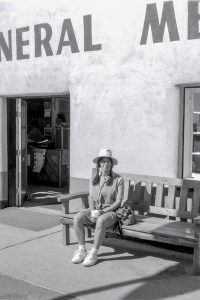 We walked round the small town on the road around it. Nicky negotiated a price reduction at the Abiquiú Inn (although I’m not sure where else we could have stayed!), and we had dinner in a Mexican cafe just down the road. A nearby Mexican store had blue corn hanging drying outside. 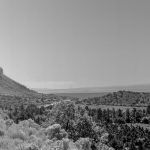 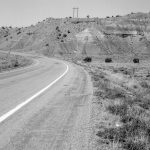 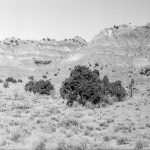 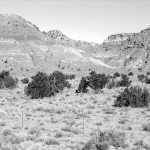 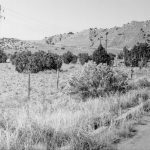 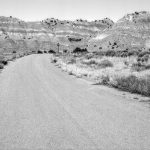 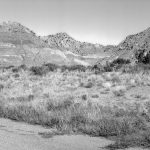 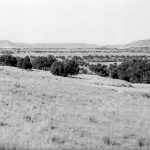 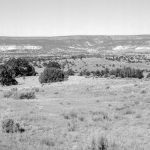 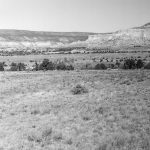 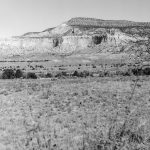 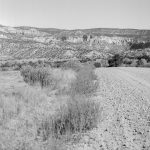 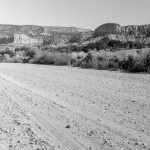 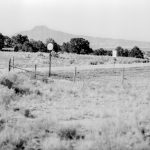 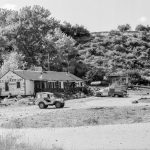 [Previous: Taos and the Rio Grande]       [Next: Abiquiú to Bandelier]