Day 8: Bandelier through snow to Jemez Springs and Santa Fe 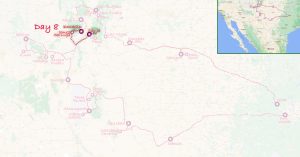 Saturday October 15th: During the early morning we had been woken several times by the sound of heavy rain on the tent, then by the bark of a passing coyote. the inside of the tent was beginning to feel damp in places. By dawn the rain had stopped but the clouds were still low. Breakfast was slices of cold pizza (see yesterday’s entry!).

During the morning the sun gradually appeared and we dried the tent, our anoraks, and so on. A nearby group of young teenagers had done worse than us judging from the amount of clothing being hung up to dry. Nicky was shown a black widow spider which was creating its web in the women’s toilets; a cubicle to avoid!  After a lunch of cold pizza we left the camp site at about 1245, calling in at the Visitor Center to buy some Indian poetry.

Our plan was to drive through the mountains on NM4 to Jemez Springs. Having left Bandelier and started to gain altitude we quickly realised how lucky we’d been. What had fallen as rain at Bandelier had higher in the hills fallen as snow.  Had the snow line been slightly lower I’m sure our tent would not have coped with two feet of snow on top of it! We had views over the snow covered Valle Grande. Trees had been broken by the snow and around one bend there was a large rock in the road.

Photo Gallery: the road to Jemez… 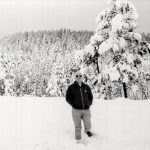 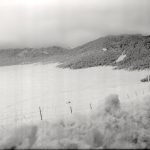 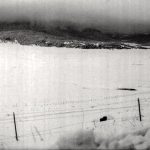 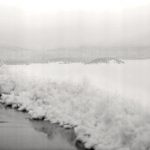 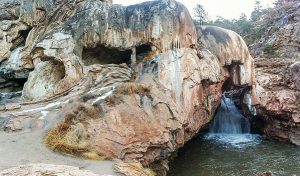 Below the snow line again, we reached Jemez Springs and eat some delicious pumpkin pie in a homely roadside cafe, a welcome change from cold pizza! We were shown the bath house where you could soak in the hot, sulphurous water. We went back up the road to look at the soda dam and I climbed into a cave in the dam which was decorated with flow stone and contained a steaming H2S smelling spring. Jemez Springs is part of the Jemez Pueblo for which we were given an information leaflet.

The motels were full so we continued to Santa Fe, arriving at about 1830. We got the last room at Motel 6, I guess the weekend is more difficult for accommodation even in October. We started to drive into town but, tired, stopped and eat at Denny’s.

[Previous: Bandelier in the Rain]       [Next: Santa Fe then Gallup via Pecos]