Day 15: Postscript… the flight back 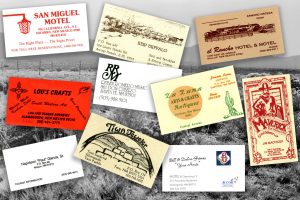 Saturday October 22nd: Including the time at my meeting at Garrett Creek Ranch, we’d been in the States for almost three weeks and it was time to fly back to the UK. However we still had one or two more experiences!

The first was Breakfast… Having packed our bags at Motel 6 we set out in search of Breakfast. Not fancying the “Pink Poodle” cafe, and after a significant drive without finding a Denny’s we ended up in “Tippin’s Pie House”.  The breakfasts were huge and expensive but when Nicky found some plastic in her hash browns the waitress was dismissive. However we complained on leaving and the manager was very apologetic and waved the cost of both breakfasts, some $18!

Next was the Hire Car… We’d only got back to the Motel at 11am and had to finish packing before the 12 noon checkout deadline. We sat by the pool for a short time before driving to the airport to return the Hire Car. The guy at the car return had a hand held computer/printer which accepted my credit card (at that time a novelty). Meantime I had  to fill in an accident report for the rubber strip under the front bumper which had got damaged when we could not avoid running over a lump of wood lying on the freeway. When I looked at the bill it was huge, about $2500! When I queried the amount it turned out he had entered the rate we had negotiated, $90 per week plus taxes etc., in the box for the daily rate.

Then the flight to Gatwick… We took off after only a 30 minutes delay. The plane was a DC10 with less seat spacing than on a 747 and seat trays which did not slide. The people in front of us had their seats right back and when I tried to get out of my seat I accidentally shook the tray of the guy behind me, spilling some of his beer… to his drunken and very vocal annoyance. Later in the flight he started shouting and making a lot of noise and when I complained he started threatening me and then invited me to the back of the plane “to sort me out”! Knowing that was where the cabin crew were gathered I complied. As a result, Nicky and I got moved into different seats and then, before landing, into first class. A body guard from “Aviation Defence International” escorted us from the plane and through the baggage hall, where he faced down the drunk guy when the latter tried to approach. Fortunately, being a work trip,  we had a taxi booked to take us back to Winchester rather than having to wait for a train. We asked the body guard if incidents like this happened often and he replied “all the time”. His main job was dealing with passengers who had drunk so much free alcohol in the airport business lounge that they were not fit to board their flight!

Finally, when we got home… I couldn’t find the door key and we had to get a spare key from our neighbour. The final end of our adventure!

[Previous: Odessa to Fort Worth]